This is the first time I have rigged in a long while and I must say I was a little rusty. Once I got the hang of it though, I had a lot of fun!
The best way to get better at rigging is to force yourself to rig four characters. That was quite the challenge but I am glad to say I am still alive at the other end.
Here is the deformation test for the N character...

Although in the final animation we are not using all four characters, they were still modeled and I still rigged them so it would be a shame to not show anyone so here is the deformation tests for all of the four characters.

Even though they were not all used, at least I have four rigged characters to play with when I get a chance. It was also good to practice my rigging as its a skill I think will be handy to keep up with.

Now onto the animation!
Posted by Unknown No comments:

Email ThisBlogThis!Share to TwitterShare to FacebookShare to Pinterest
Labels: Other Work, rigging

For this project we had to create an ident or sting for a brand or tv channel. (something like the E4 stings)
I worked as one half of a pair and together we brainstormed some ideas. Below are some quick thumbnails of a few of our favorites.

In the end we decided on the second idea. We thought the characters would be really fun to design and there would be opportunity for some really nice toony animation. We are both fans of Nickelodeon and think we have a good idea as to what their stings are like. We want to make something cute and funny that is appropriate for kids so it fits with the channel it will be made for. 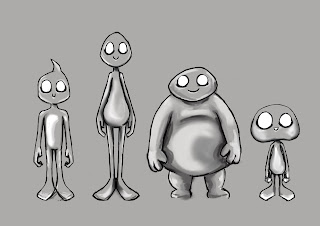 We wanted them to look super cute but also have simple designs. I think they turned out really nice.

First part opetions (The entrance of the first three characters N, I and C)

Second part options (N, I and C waiting for the entrance of K)

Third part options (The entrance of K and the 'gag')

After we had all the options, I pieced them together into animatics to make five options for our final ident....

After asking around out classmates to see which people preferred we decided to work on the option number two. I went onto develop this idea further and in greater detail and made thumbnails and an animatic of our final plan...

We were really happy with our final animatic above but unfortunately we came to realize that two people modelling, rigging and animating four characters was a little unrealistic.
It was a shame as we had worked hard on all the characters and came to love them, but we would prefer to adapt our idea and get a good quality finished animation out of it then an unfinished version of our original plan.
I adapted our idea so we just had the first and last character. This cut down on the animation immensely but the heart of our idea was still there. 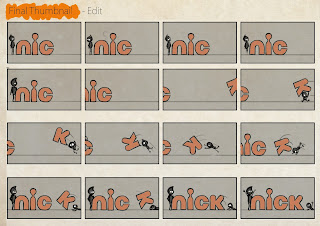 Over all it would have been nice to complete our original idea but I am still happy with the adapted version. Maybe one day I will go back and animate the full thing, but for now, I will do my best to make this version awesome.

[Character designs by Natalie Knight, find her at... http://natalieknightthegeneralist.blogspot.co.uk/]