'Alpha' is a project that I will be co-directing and also working on as head of animation. 'Alpha' planned to be a short film acting as a cinematic game trailer.

As head of animation, I was responsible for getting an animation team together and sorting out who was going to be responsible for what animation wise.
The first thing to do was to cut a rough animatic/ previs together so we had the whole short planned out and I could start dividing shots between animators. This took a very long time, as there were many points we wanted to communicate to the audience but we also didnt want to ruin the pace of the shot or make it too long. We aimed for a minute and a half and we managed to get it almost exactly which I am very happy with.

Luckily, everyone managed to get the shots they wanted or were happy with. Each person on the animation team needed this project for different reasons so I tired to tailor their shots accordingly to what would be most useful for them. If they are happy with what they have to do, hopefully they will enjoy their work much more and produce better work as a result.

These are the shots that I will be animating. I chose one character and one creature one. I wanted the character one because these scene should have a lot of subtle acting in it and I want to get better at that. Especially because a lot of my other projects are very over the top.
I chose the creature scene because I would really like to improve my creature acting skills as I have not had the chance to animate many animals. I am also yet to animate an non realistic animal.
I am happy that these scenes are interesting yet each just contain the one character as I also want to make sure I have enough time to work with the others as head of animation. 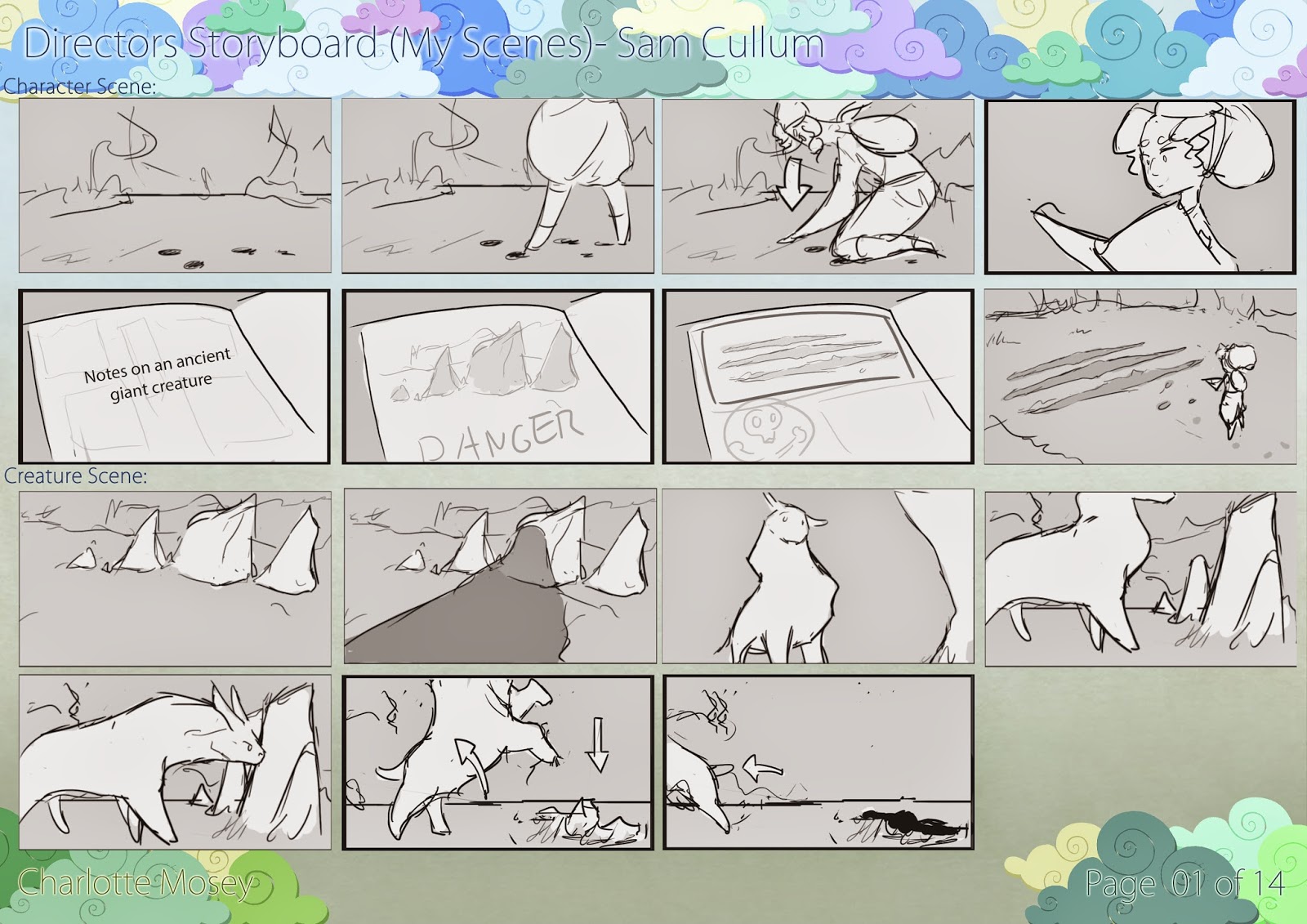 First I worked on the character scene. I did some research into the type of character I think she would be. It helped that I was provided initial character designs by the Director who will also be working as head of the art side. 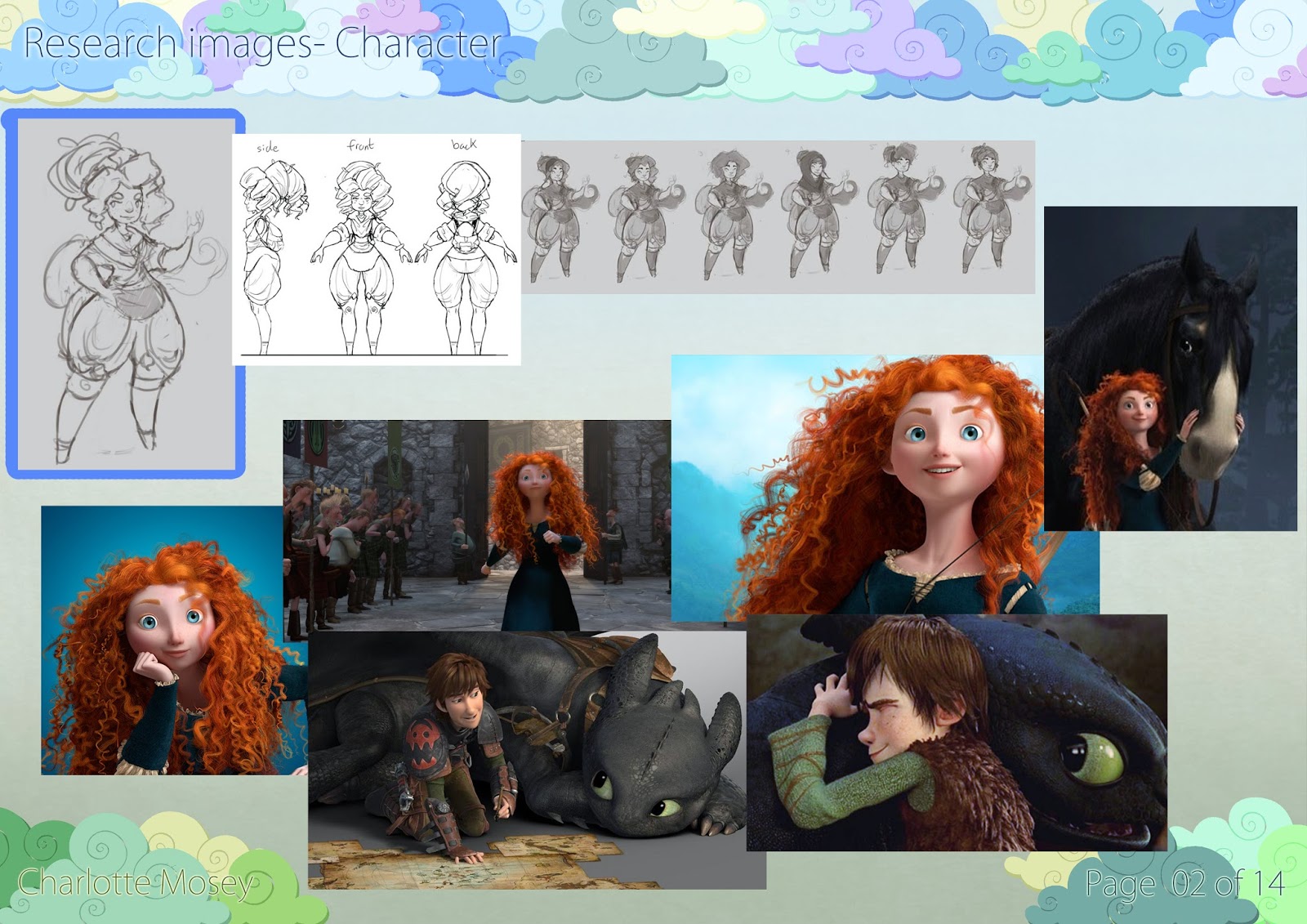 I explored a few different ideas while still keeping the base movement the same. I wanted to explore different emotions she may be going through during this scene which would impact the subtle ways in which she would perform the action of bending down to look at the claw mark. 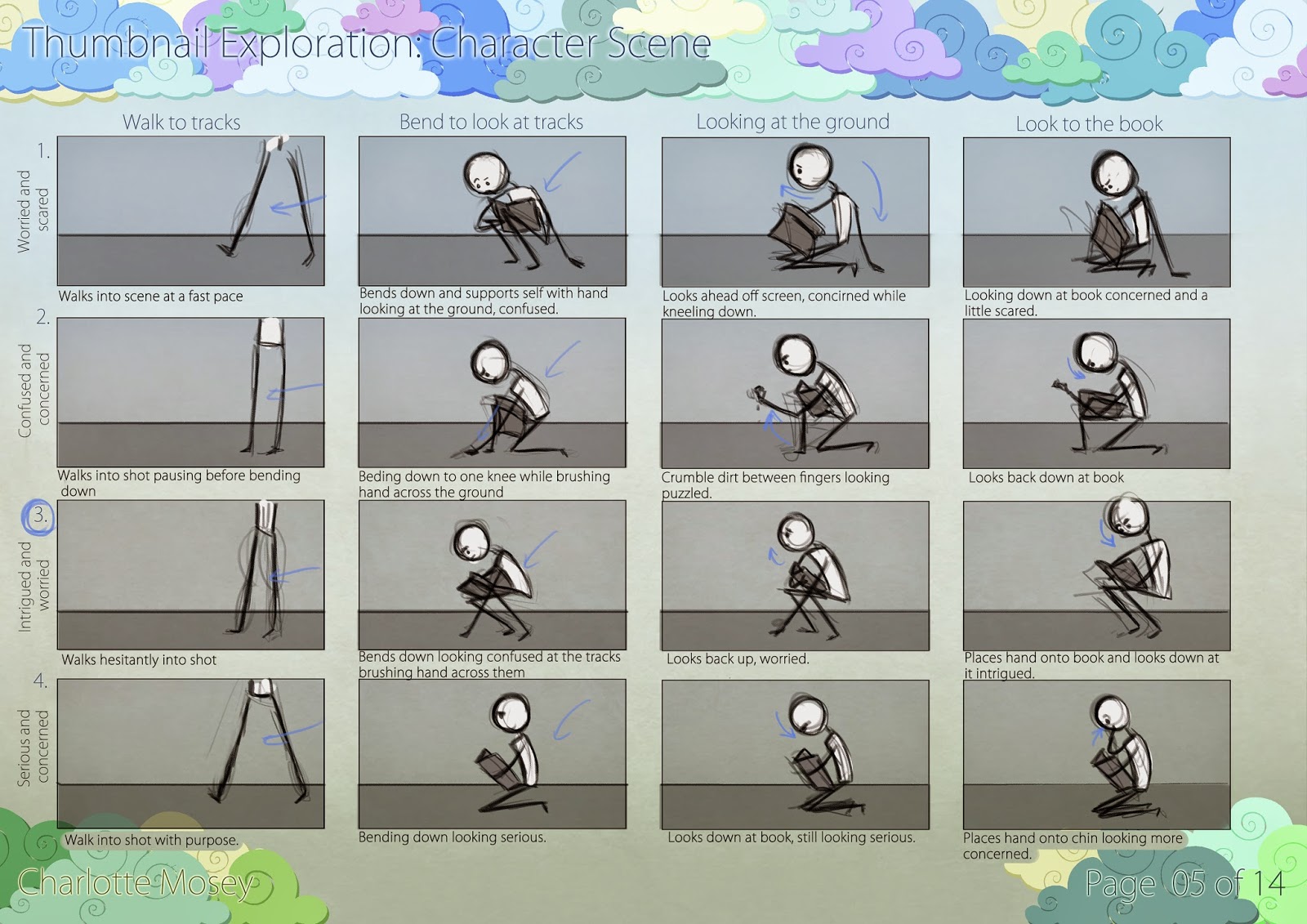 In the end i decided with the third as this claw mark is something they have never encountered before and  I think, being the more sensible one of the pair, she would realize the danger and be worried.

I then went on to develop that idea and this was the result. I think timing is going to be very important in this scene. I want her to pause for a moment before she bends down and also pause throughout to show she in deep thought.

I am really looking forward to animating this scene as I think its a chance to spend a nice amount of time on a relatively simple scene and also a chance to improve my subtle animation skills.

This week I continued on with the pre prodcution with the 'Dance Off' project. I have quite a large amount of animation to do on this project, so it has taken a while to plan out all the shots. Luckily, all off my shots are one after the other so that has made things easier for me as I dont have to worry about the flow of the whole shot as much.

Continuing on, Shot 16 is the male characters reaction shot to shot 15 (this is the shot where Ragina snaps her fingers and turns a spotlight on above our characters head) This is a very quick shot but a lot needs to come across in that time. I want to communicate his shock at this surprising event (as most people cannot turn lights on and off with the click of a finger) he also needs to look confused about whats happening and look worried about what could be following. 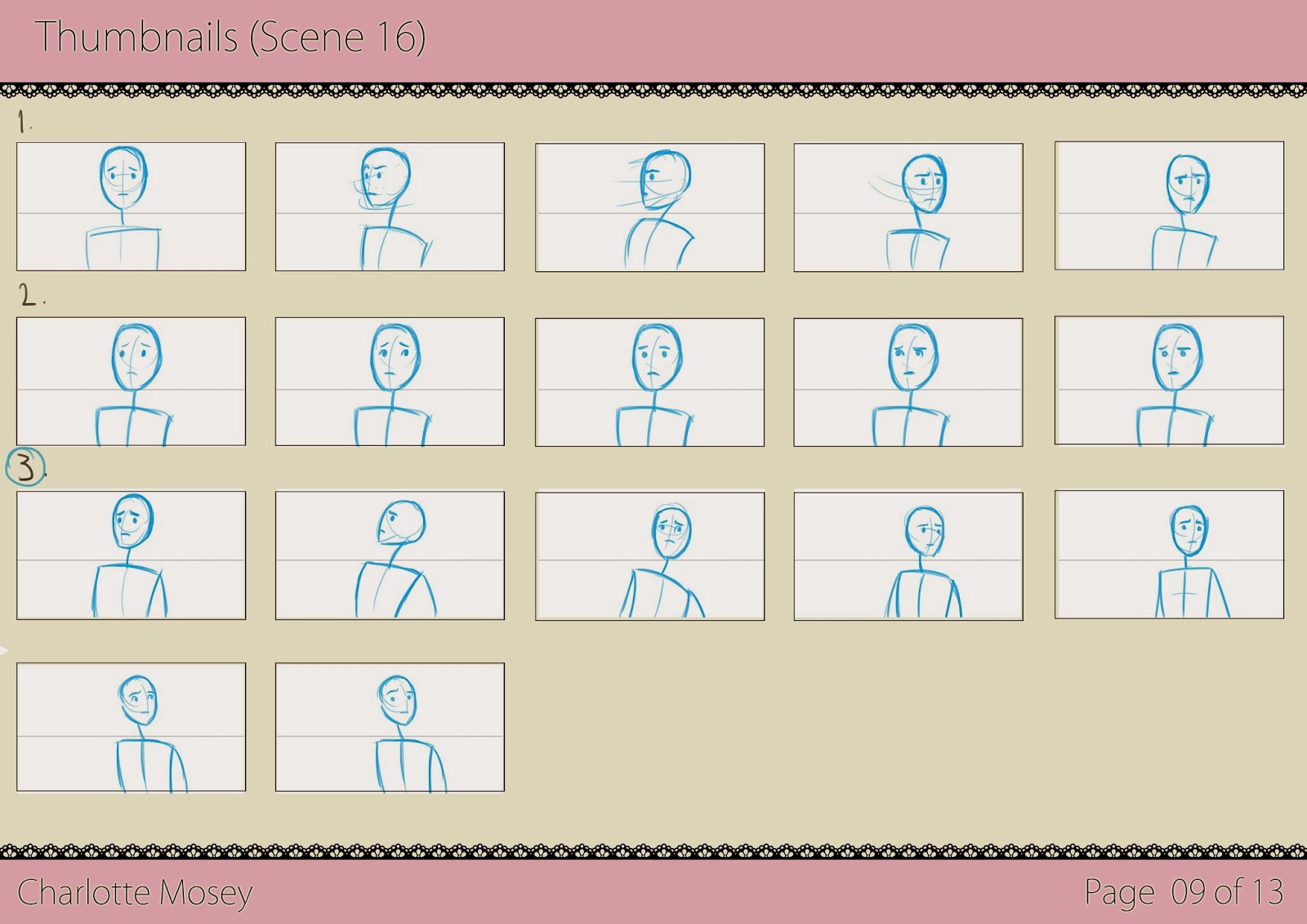 I played with both a lot of body movement and just the facial expressions with this shot. However, I felt more body movement gave it life, and given how over the top he reacted in an earlier shot (shots 12-14) it would have been a change in character for him to suddenly not be as over dramatic. I chose the third as I felt it also communicated to the audience this is the second time she has barged in on him acting odd and he is now slightly concerned about her and her persistence.


The next shot is Regina seductively walking towards the male. Me and the director had great fun filming video reference for this and looking at films such as Chicago for inspiration. We played around a fair amount with how she was going to walk towards him. 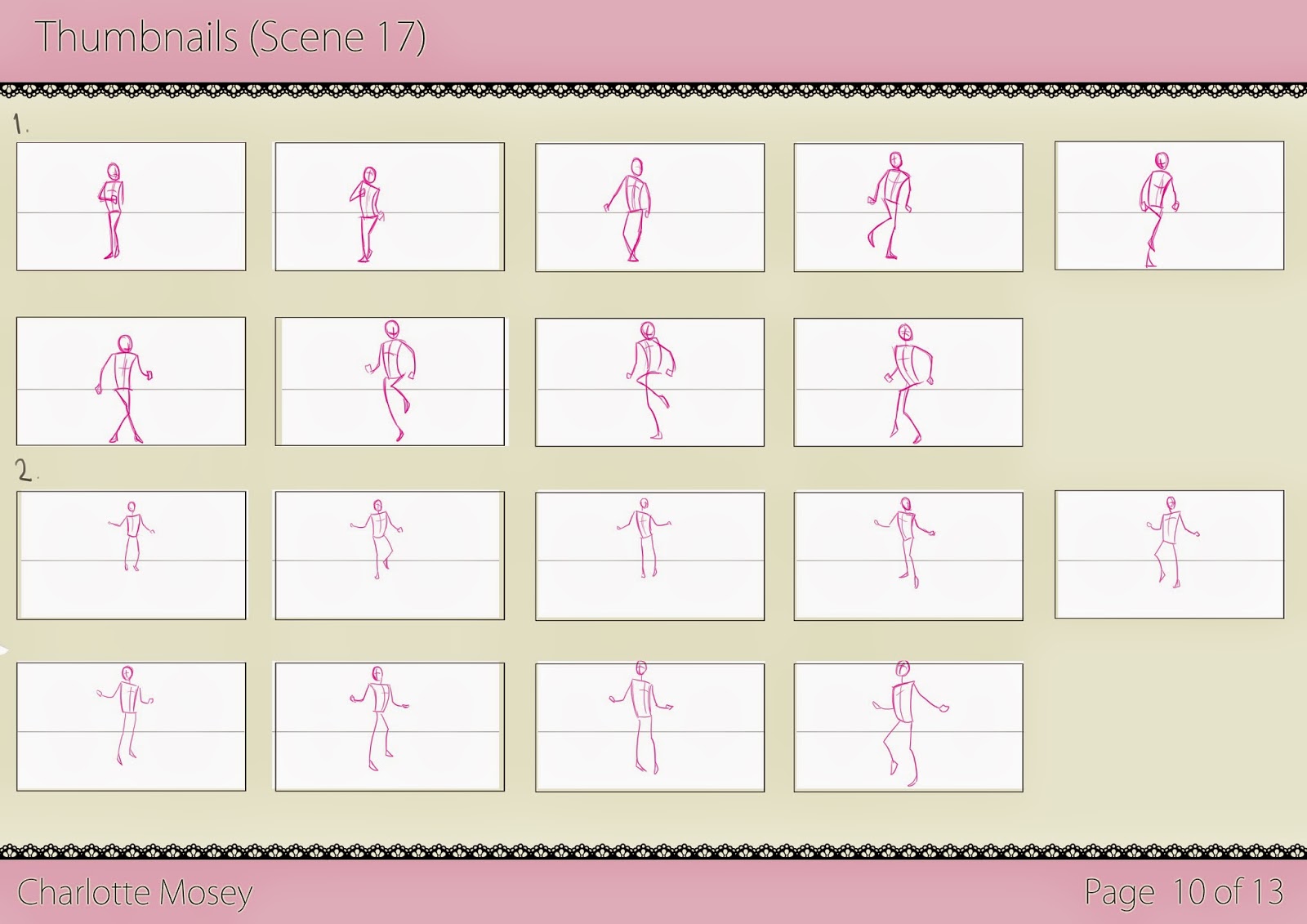 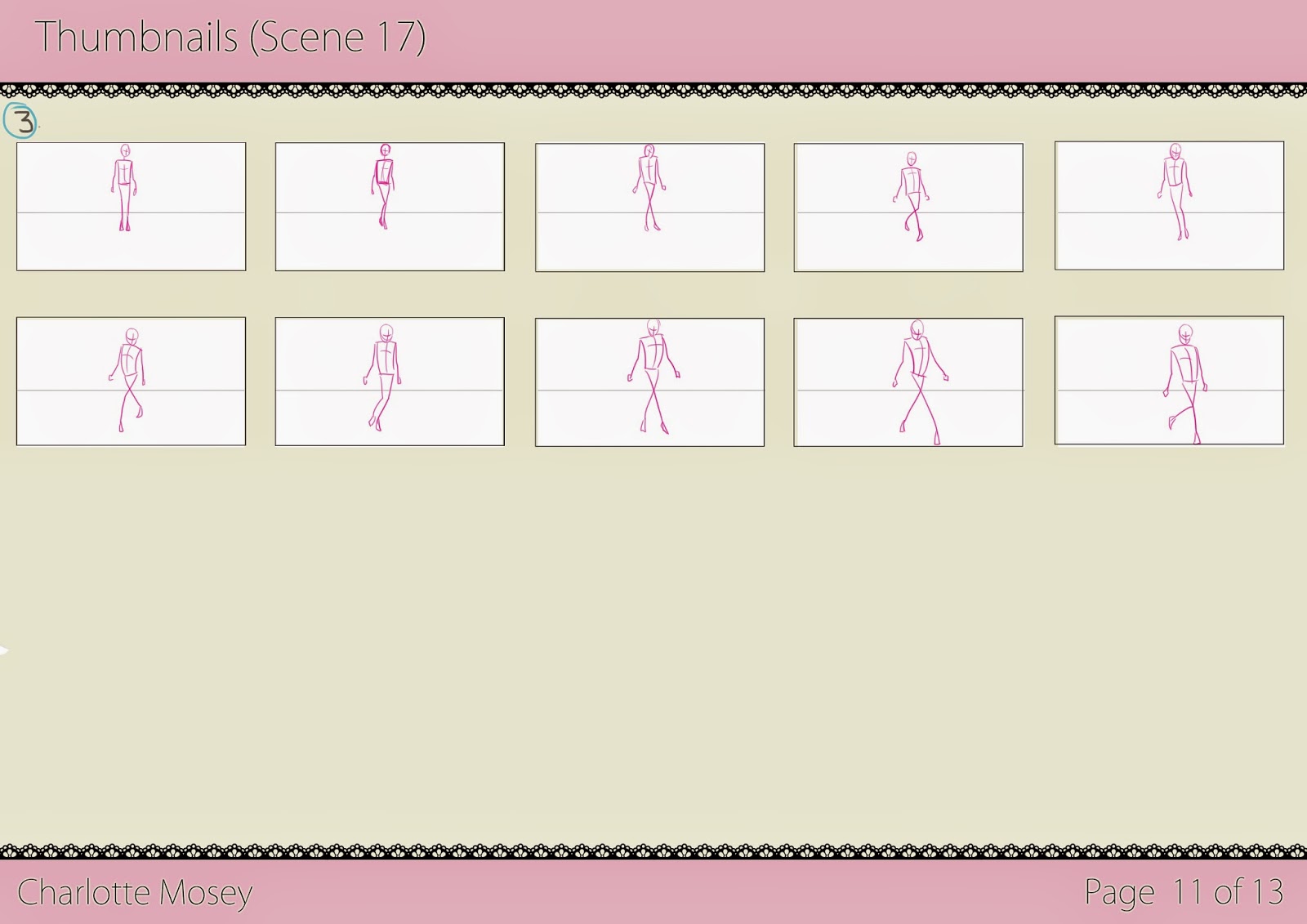 In the end we settled for the third. The first was very dance like and the second was quite silly and funny but I felt the last was still funny but more predatory too. She is coming to 'get him' in this shot and as well as seduction, I want to be able to convey the desire in her movements.

The last shot I have for this project is a very long but hilarious one. Regina finally makes it to Alphonse and starts seducing him by dancing around and on him. We filmed reference for this shot pretty early on and my thumbnails are based from our reference for this shot. The reference filming came out so well none of the team really wanted to mess much with the shot, so I only tried two similar versions. 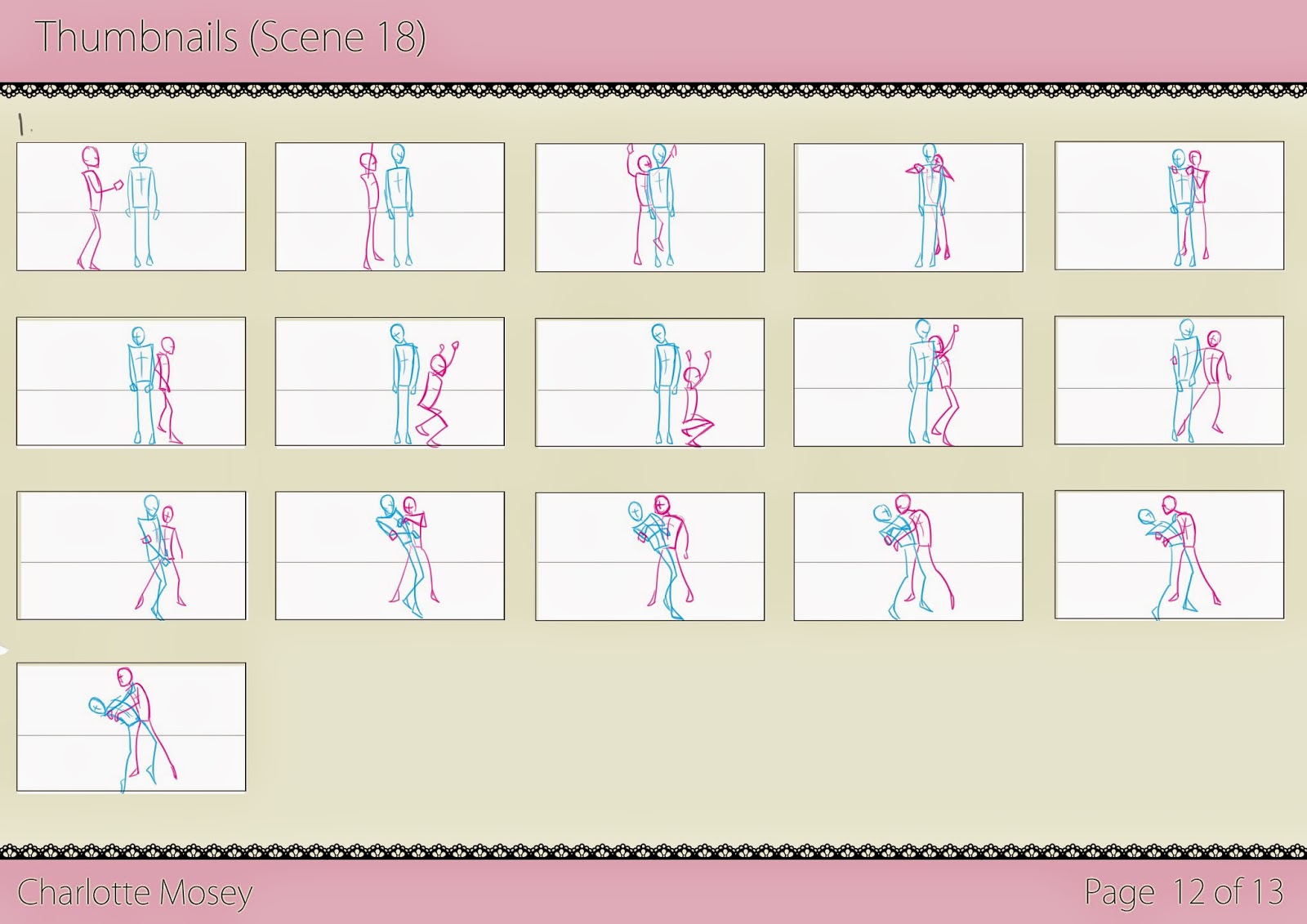 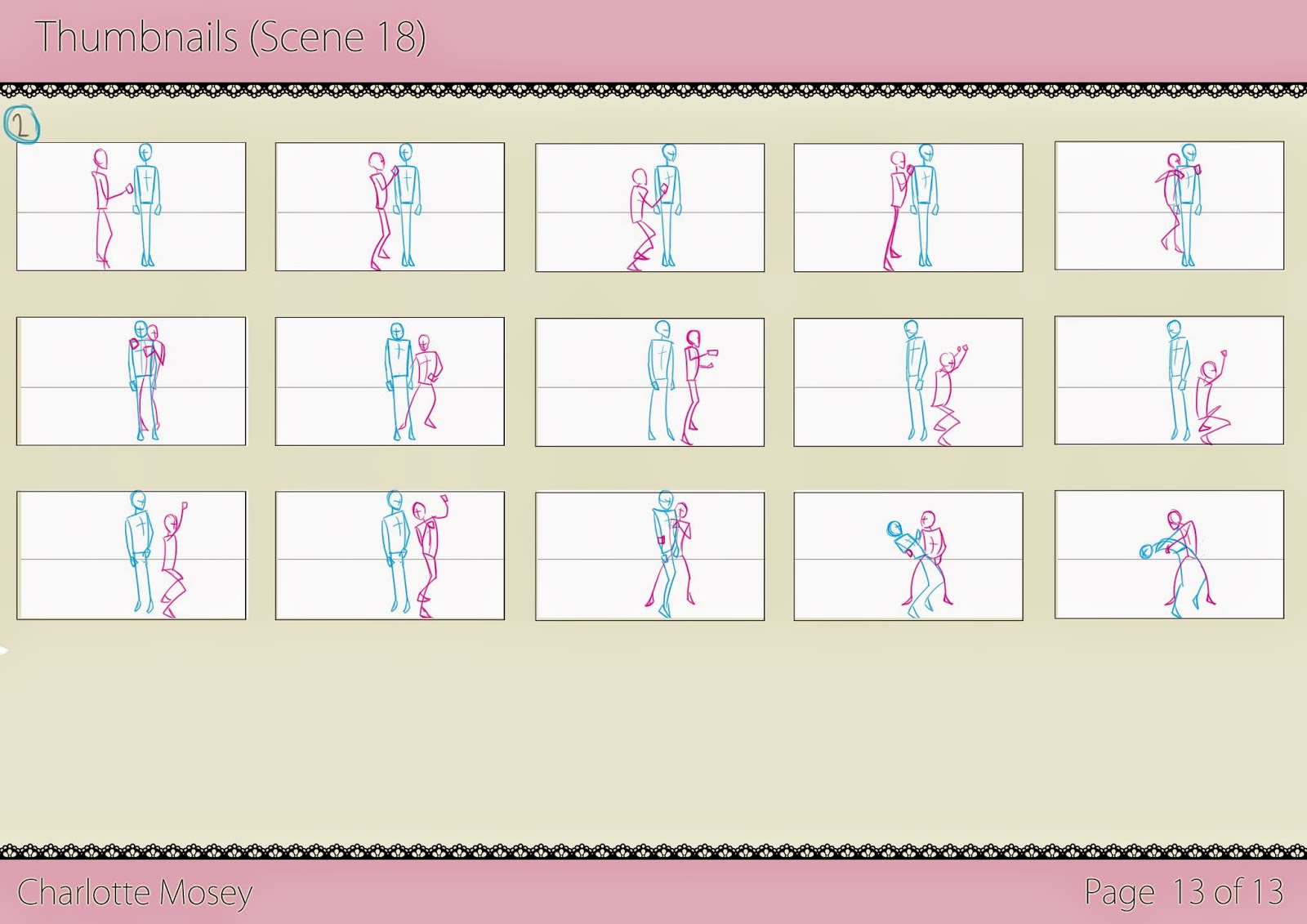 Alphonse's movements will be very minimal in this scene, I want him to seem very stiff and awkward, not quite sure what to do with himself in this situation. On the other hand, Regina will be throwing herself all over the place. I think there is the opportunity to get some nice hip action in this scene and I also think the facial animation will be a lot of fun.

I am really looking forward to working on this project. I think its going to be really fun and if anything, I will just be laughing watching my video reference back. Im hoping this project will really help me with body movement and mimed acting. Its a good opportunity to improve my facial expressions as they cant talk and also improve on some basic body mech as there is a lot of walking and shifting weight in the shots I have. This scene is very large but I am excited to take it on and make it funny and silly and it should be nice laugh on my reel.

Dance off is planned to be a short film set at a high school prom. The main character attempts to make his way across the dance floor while being ambushed by various girls trying to win him over by dance.

After a lot of decision making I was luckily given the shots I had initially had my eye on from the first pitch. At one point during the short, the main character (Alphonse) runs into a popular 'mean girl' type character (Regina). My shots include their encounter.

After I had my shots given to me, I took the animatic given to me by the director and broke it up into my shots. 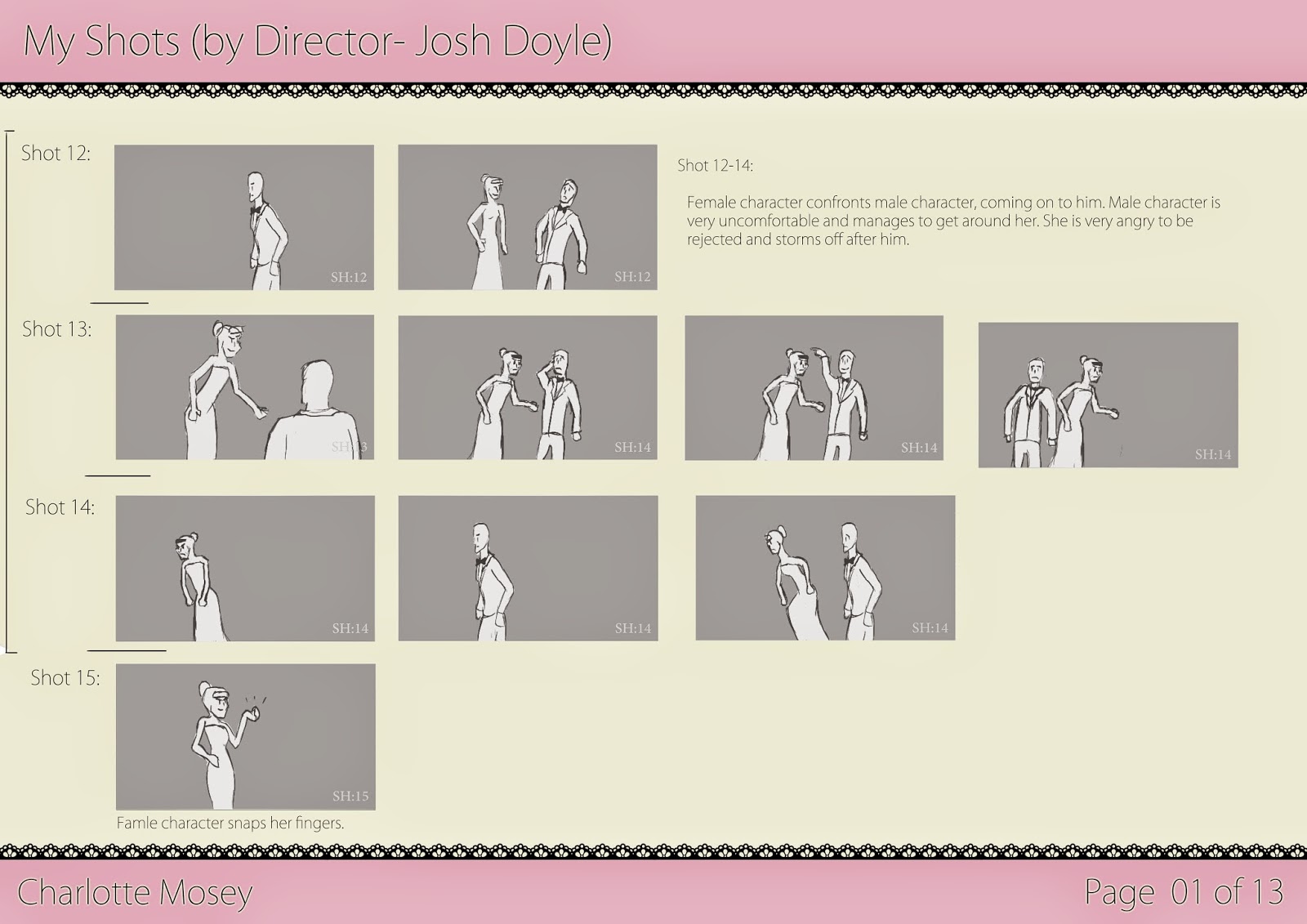 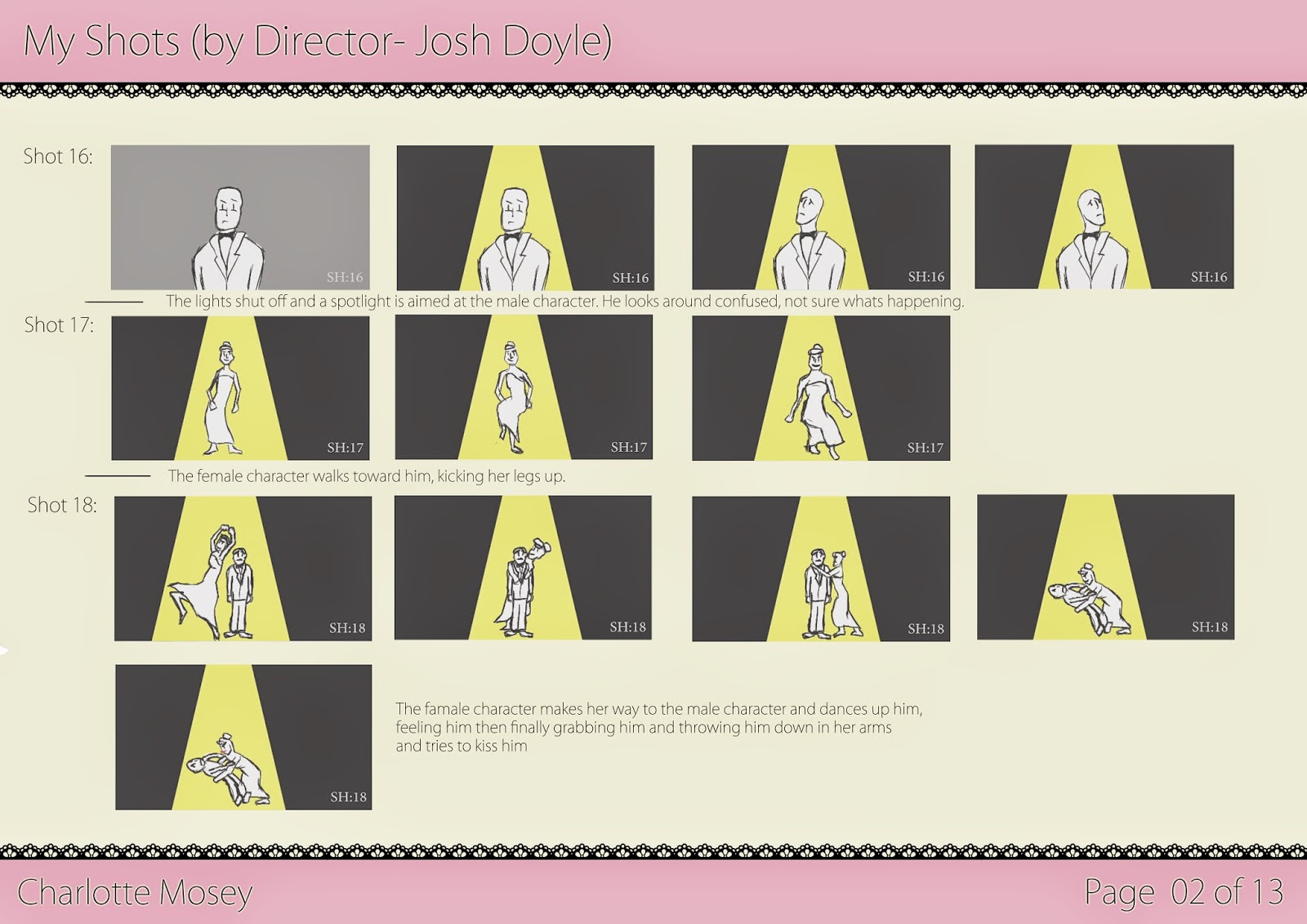 I was also given character profiles for both the characters I would be working on. With them, I went on and did my own research and looked at characters similar to the ones described for inspiration. 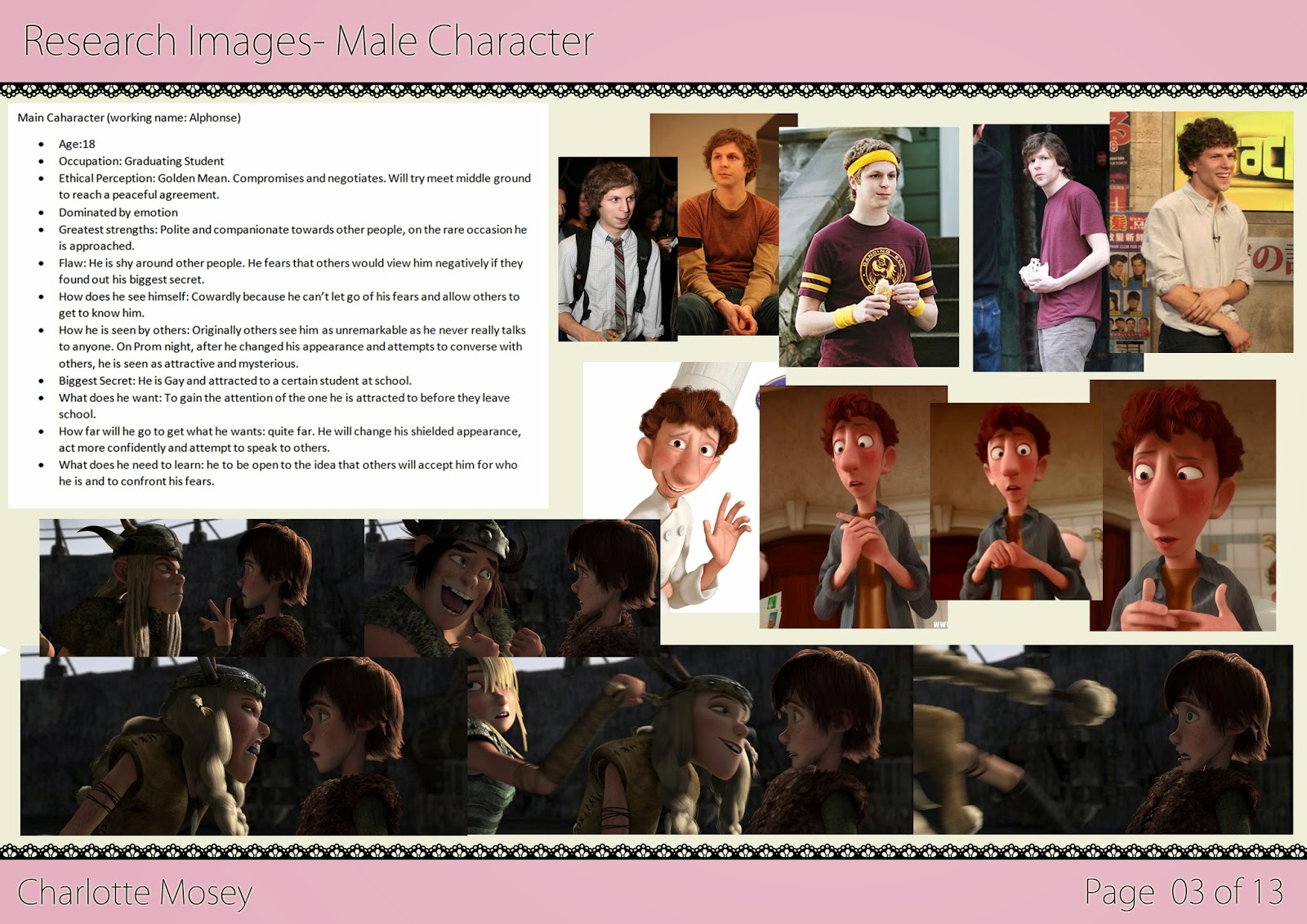 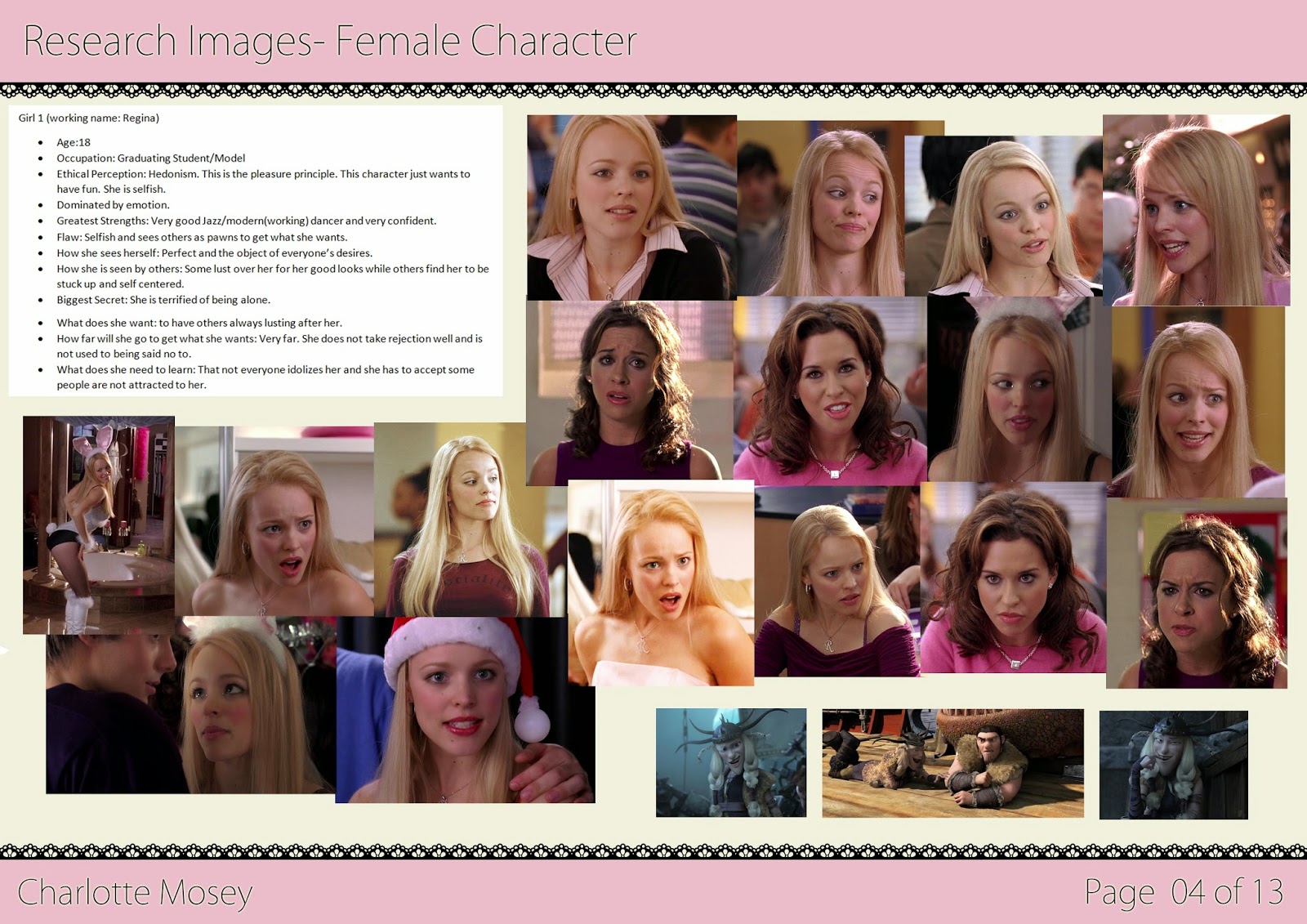 First was shots 12-14 to plan. This is the two characters first encounter. Regina comes into shot and stops Alphonse in his tracks, she gestures for him to dance, he refuses and makes his way past her. She is not used to this rejection and storms after him . 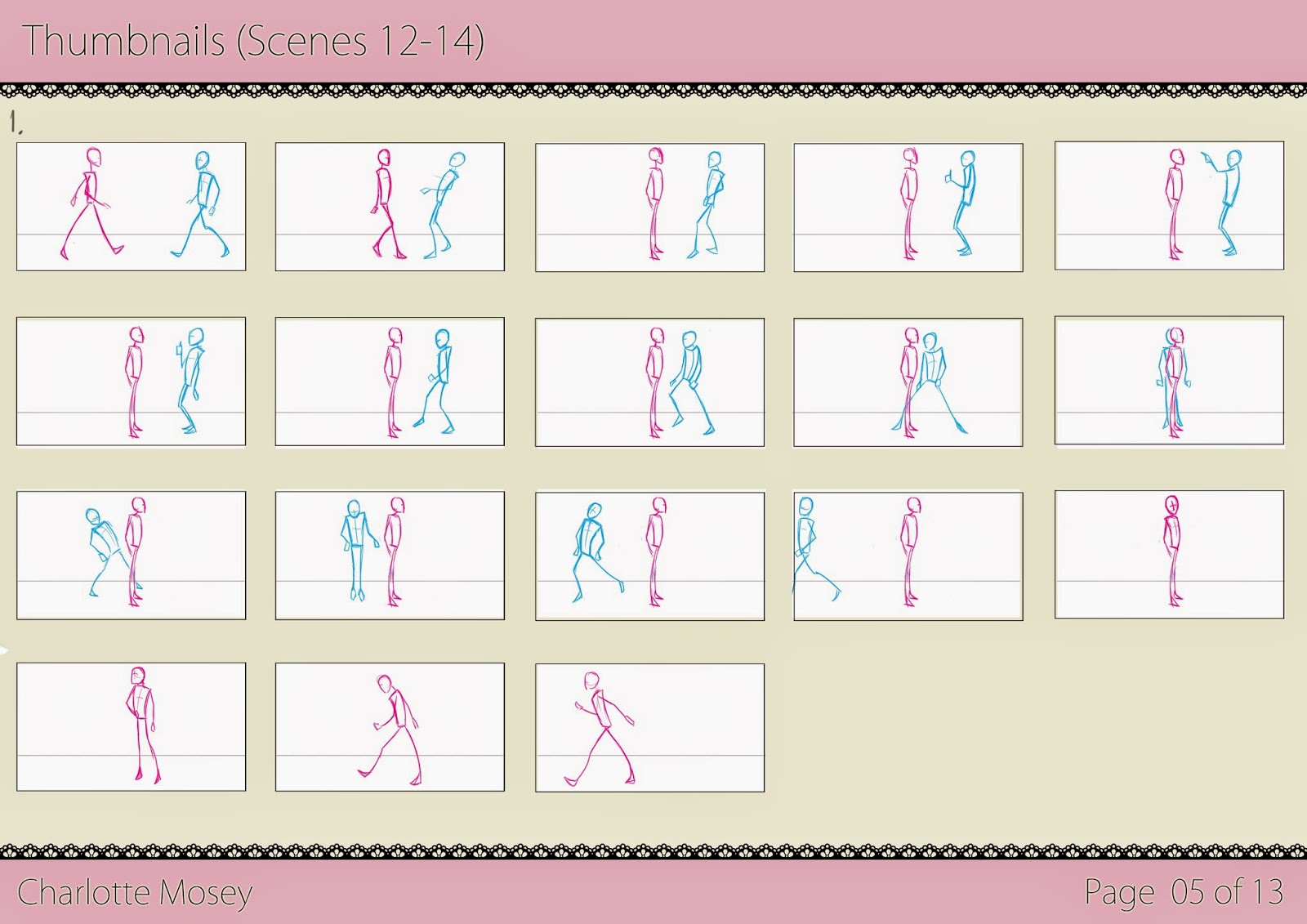 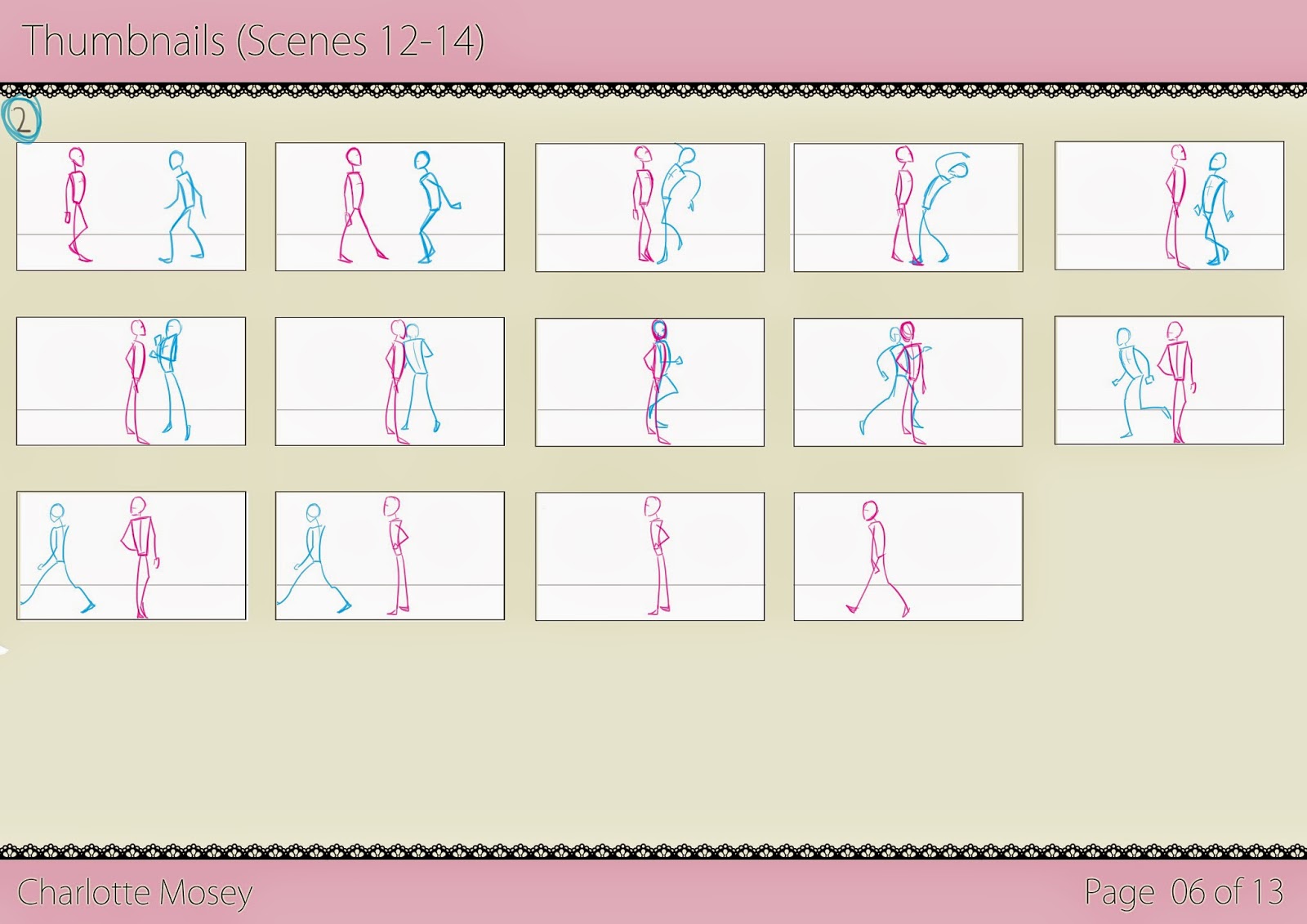 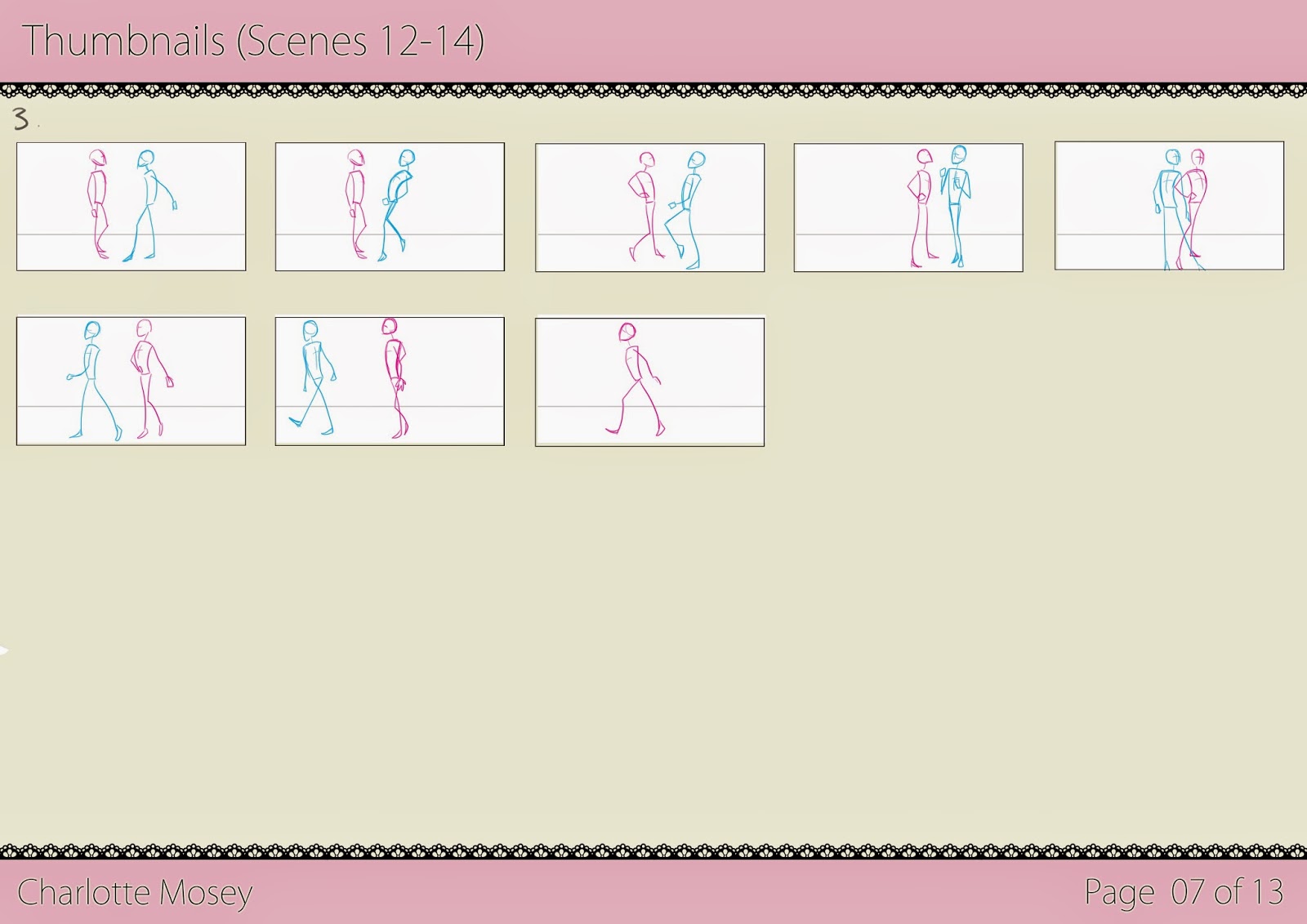 In the end I chose the second as I feel it is dynamic and there are a lot of fun poses to play with.

The next, shot 15, is where Regina once again stops in front of Alphonse and snaps her fingers which causes the main lights to go out and a spotlight to appear over Alphonse. 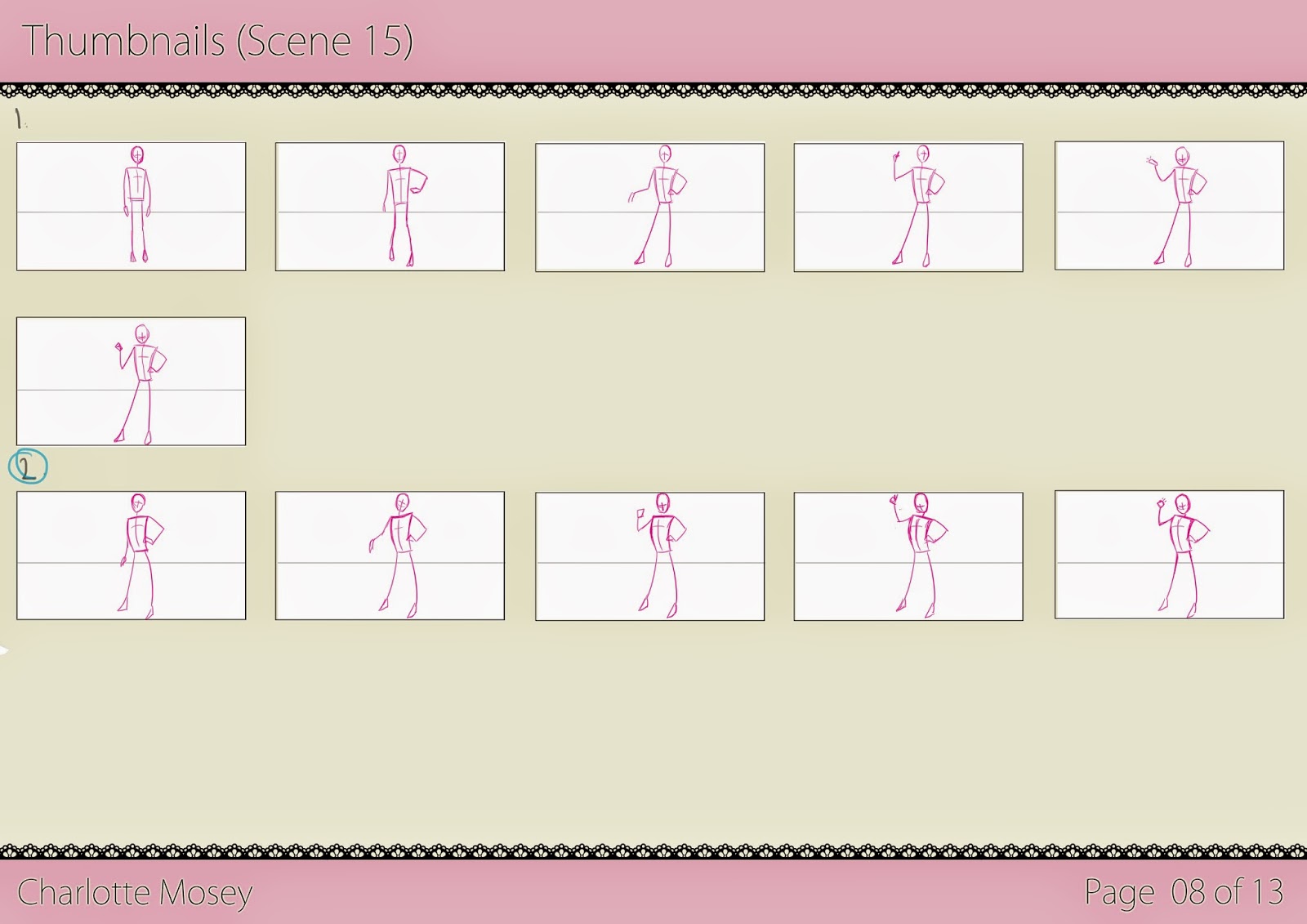 I preferred the second as I felt it was more clean and sharp.

I have ended up with quite a lot of animation to do for this project, which Im looking forward to, but its going to be a lot of work. Im going to continue to work on my pre production for this project next week and hopefully have it all finished.
Posted by Unknown No comments: