This is a show reel of my work from the past year or so. Im going to FMX this year so I wanted to have something to show people at the event.

Over summer I will make an updated version with all my work from my final project included.
Posted by Unknown No comments:

The second part to the personal section of my major project is a Duel Dialogue piece. For this I had to find a 10 second sound clip with two people and then animate that. It took me a long time to find a good section of dialogue that I liked at also had different emotions and transitions of emotion. I didn't want to use a clip from 11 second club because I often look on that website and I didn't want my clip to have been animated to multiple times already. I didn't want to be influenced by ideas others had already come up with and I didn't want to compare mine with others that were animated bu much more experienced people then me.

I eventually narrowed my clips down to one. I really liked this one because I thought there was a lot of personality in each of their voices. I also liked there was both a male and female in this clip as I haven't really animated many females before. I think this clip will be difficult to lip sync to because of how fast they speak but I seem to always like the things that are hard. Hopefully I will be able to get it looking good and still readable.

First I needed to decide who my characters were, what they looked like and their personalities. I started off with some initial character sketches, I then developed the ones I liked most. After deicing which of these was my favorite I created a quick model sheet for them.

After deciding on my characters I moved onto the shot and actual animation and movement of the two. I did some quick sketches of ideas for the camera and character placement, I then went onto some initial blocking ideas. I just explored emotions driving the character in the scene. 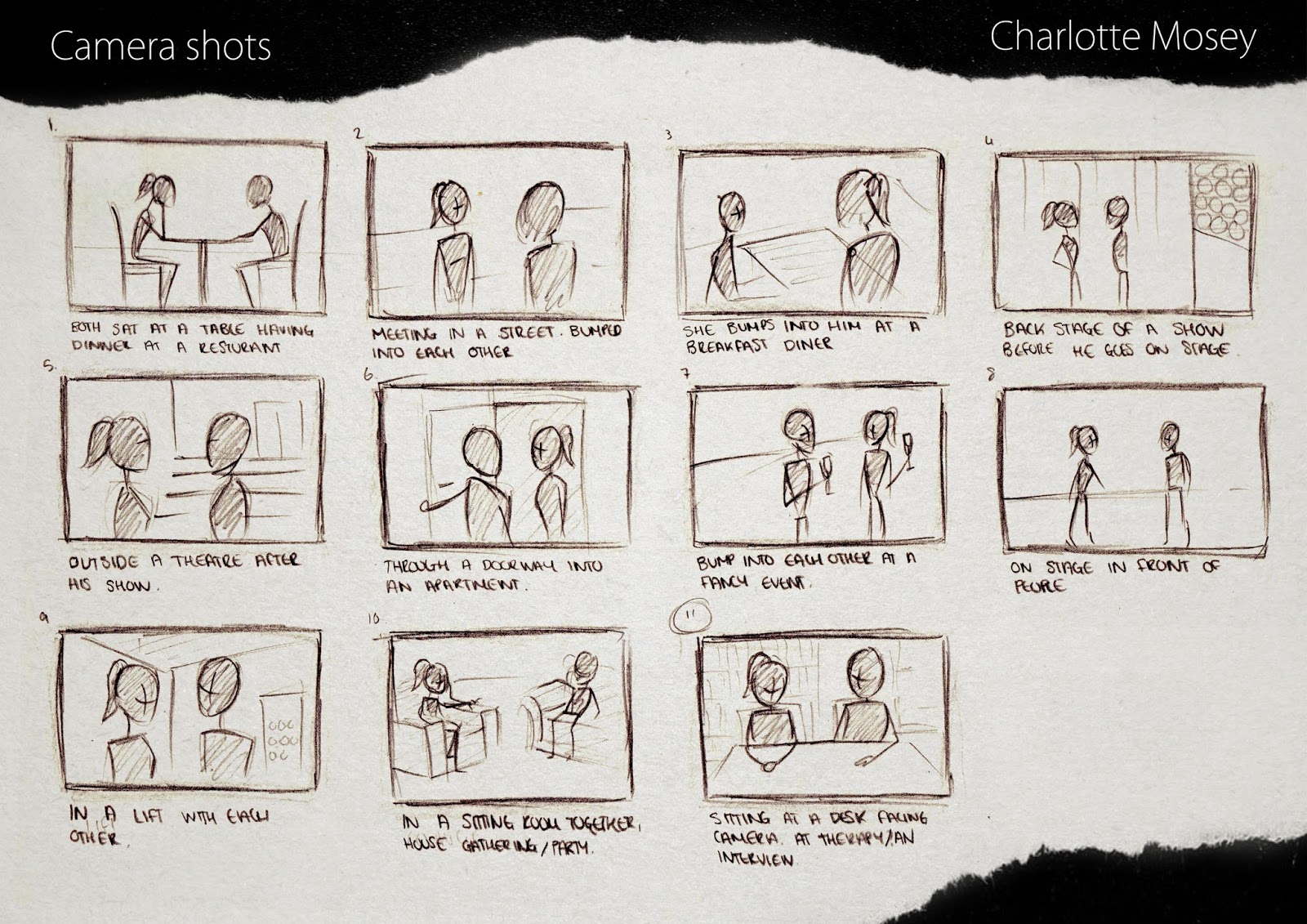 After I decided on these I moved onto rough thumbs and animatics for the scene to experiment with their interaction and body movements.

This really helped me visually see both characters interacting with one another and showed me what did and what didnt work. After I made my final set of thumbs and final animatic.

I wish I could have spent more time on my final animatic as I was not entirely happy with the drawing quality. I think it conveys the general idea of what I want to achieve in the scene but there are many subtle movements that couldn't be captured in a quick animatic. (Maybe I will put up my LAVs in the future as they are much closer to what I want the final animation to look like)

After I had decided on the movement I made some bar charts to break down the dialogue and lip sync. This will make it much easier for me to animate the lip sync in during production.

Over all I was happy with my pre production work for the duel dialogue. It has got me really excited to animate these two characters as I feel like I know them.
This is probably going to be my favorite part of my major project work because its very similar to what I would like to get into after university. I love character animation because it includes my love to drama and performance as well as animation. I cant wait to crack on with this and improve my character animation skills. I think this duel dialogue piece will be difficult, but I am the most excited for it so I hope it goes well.

The other half of my Major Project is a personal project. For this I am covering body mechanics and a duel dialogue piece. For body mechanics I wanted to animate a vanilla run cycle as I have not done one before and I think its a useful thing to be good at and know how to do comfortably.
Here are the thumbs and animatics for the run cycle:

The second part of body mechanics I wanted to do something different. A lot of people I have seen animate a jump or some sort of parkour/ free running. One of my tutors suggested something dace or something similar. When I was younger I used to do dance and gymnastics so the idea interested me. After some research I decided I didnt have enough time to fit in a dace routine (all body mechanics work should add up to 10 seconds of animation) so I decided on animating a gymnastics trick.
I researched a lot of gymnastics routines and studied their jumps and tricks. I made thumbnails of my favorites and made them into animatics to see which of them I liked best and which would be challenging but not impossible for my first try.

Here are the thumbs and animatics for my first ideas:

I eventually decided on 5 as there was a lot going on and it looked interesting, yet still didnt take up much time. I am excited to start animating this one because of the really nice curves the body makes.

Here are the final thumbs and animatics for my gymnastics:

I was happy with how this animatic turned out. It was very difficult because the actions happen very quickly so I ended up doing a new drawing every couple of key frames. This was good though because I now have a better idea as for how to go about animating this in Maya. I think blocking will take a long time, but if i get that bang on, there shouldnt be too many major problems when in spline.

I think this will be fun once I get int maya, my only concern is finding a rig that will be able to hit the poses necessary for my gymnastics animation. I will have to do some research and testing because I think I will need one with IK FK switches on both hands and feet.

I am especially looking forward to they gymnastics part of this project because personally I havent seen a similar thing done much before and I think it will stand out ( if I manage to animate it well that is) Its also something different for me to sink my teeth into which will be fun.

This is the second part to my pre production for my collaborative major project. As well as the  human characters, I am animating some of the creature. The creature is based off of a big cat and should move similarly to a lion or panther.
For the short I will need to animate the creature transitioning from a walk to a full sprint. I will be working on producing cyclic animation first and later I will work on the transitions between the gates.

For a walk and a run I created thumbs and animatics:

I was happy with how my animatics turned out though for the animation I feel I will need to stretch the poses much more and ass more character to them. I don't want them to seem too vanilla as there needs to be personality for the creature as much as there does for the humans. I am excited to animate a big cat-like animal as the only other animal I have animated was my horse. That seems like forever ago and I hope my animation skills have improved since then. I think it will be challenging but I have been itching for the chance to animate a big cat for a long time so im sure it will be fun.

For my collaborative major project I am working with third years as an animator on their short film 'Pursuit'. The quick sum up of it is that a creature is chasing a man, we see them run through alleyways till a woman shoots the creature. We learn there was a plan to lure the creature into the open with her cub to shoot it. This project will cover the 'mimed acting' and 'creature animation' part of my project.
I was super excited to get onto this project and very happy to be able to contribute to the third years final short. For my pre production I added to and expanded upon the scenes given to me in the initial storyboard. I tired out different ideas for each shot to show the director so she could pick which she wanted me to run with for the final animation.

The fist scene I had was the at the beginning. The man is listening for the creature, he spots it, smirks with confidence then when it runs closer he panics. This shot was split into three parts and I made thumbs and animatics for each part.

My next shot is when the male character gets worried and turns to run. This shot follows on from my previous shot.

My final shot with the human characters is one of the final shots of the short. This is after the creature has been shot. The two characters are proud of their victory when they hear growls from behind. In the following shot the male turns and the camera will pan to show they are surrounded by a pack of the creatures.

I wish I could have spent more time making final polished animatics for these but I am happy with what I produced. I had fun filming references for these as I got to explore different ways in which a person can convey a certain emotion without using words. (I don't think I will embarrass myself by posting them up just yet though) I think these will be interesting to animate as I really want to work on my facial expressions within my animation. I think these scenes will be great for that.

A module I take along side CG Animation is Visual Forms. One of the projects we had was to create a research diary of artist that have inspired us and our artwork. It was hard for me to choose just a few but I eventually narrowed it down. I included Artists that I think shaped my artwork and style from a young age as well as recently discovered artist that influence me now. I really enjoyed thinking back and really analyzing why I draw the way I do and who inspired me to do so.
Here are the pages of my research diary:

I am quite happy with how this turned out and I think its a nice documentation of artists I love. I went about this in a a very personal way and feel there is a lot of me in this diary. I tried to cover all aspects of art that I love and my favorite artists in those fields. If you ever wonder why I like what I like and why I draw like I draw, look to these guys above. They're all responsible and I am thankful they are.