The first project that I started working on for my Final Major was my first of two dialogue pieces. I knew that I wanted to complete two dialogue pieces, one male and one female. I wanted them both to be very different, yet interesting for me to work on.
Previously I have never had the chance to animate a female dialogue piece so this was the one I was most excited to start. I also hadn't really done anything where the character was angry and getting very over emotional, so that was something I looked for when hunting for a sound clip. Eventually I found a clip I thought had nice timing and a good rhythm to it that would work well for animation.
As soon as I eventually decided, I had to start building a character and a setting. For me, I find this important for when I come to referencing. I like to know how what kind of character I am trying to convey and that in turn will influence how they act in certain situations. 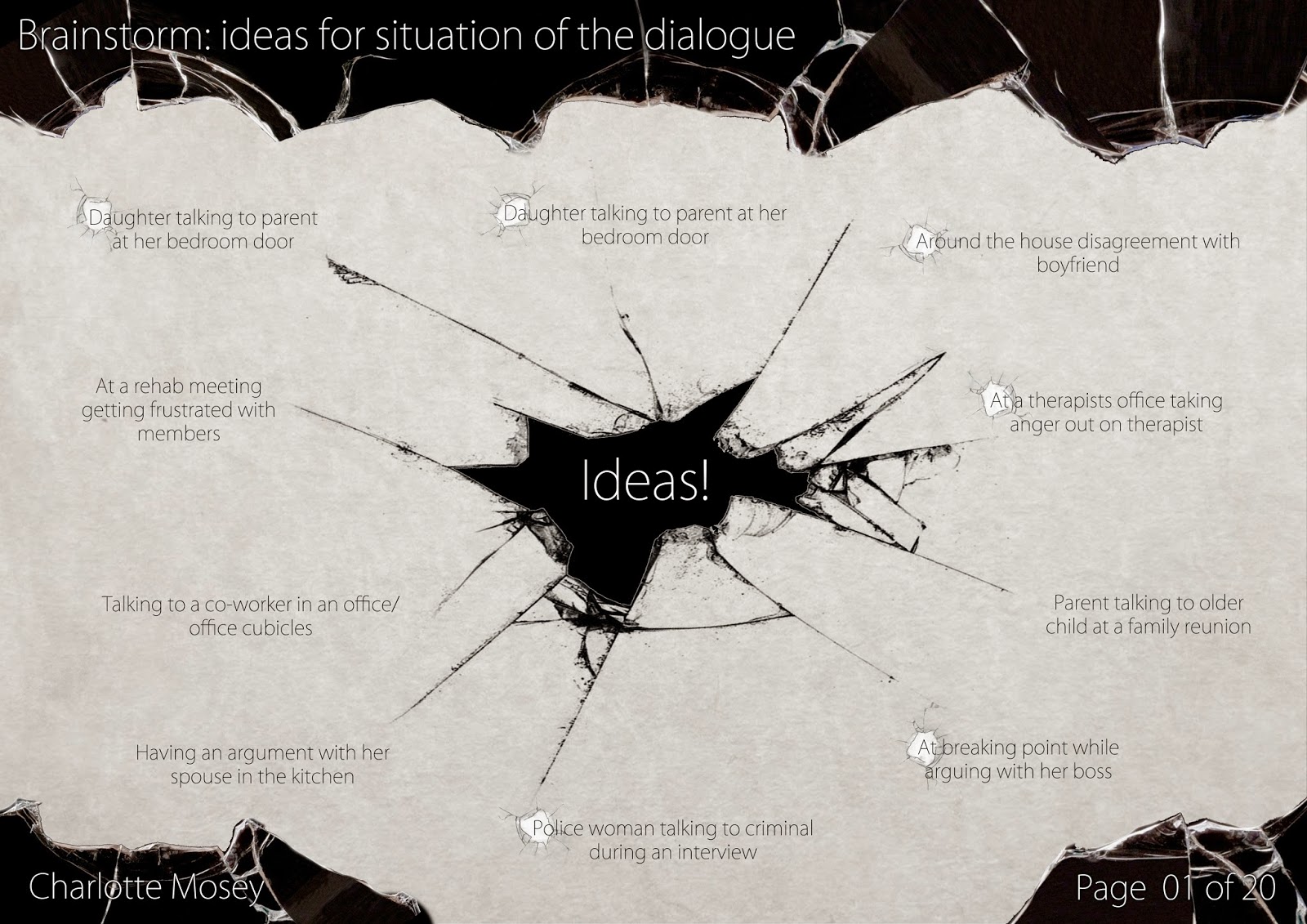 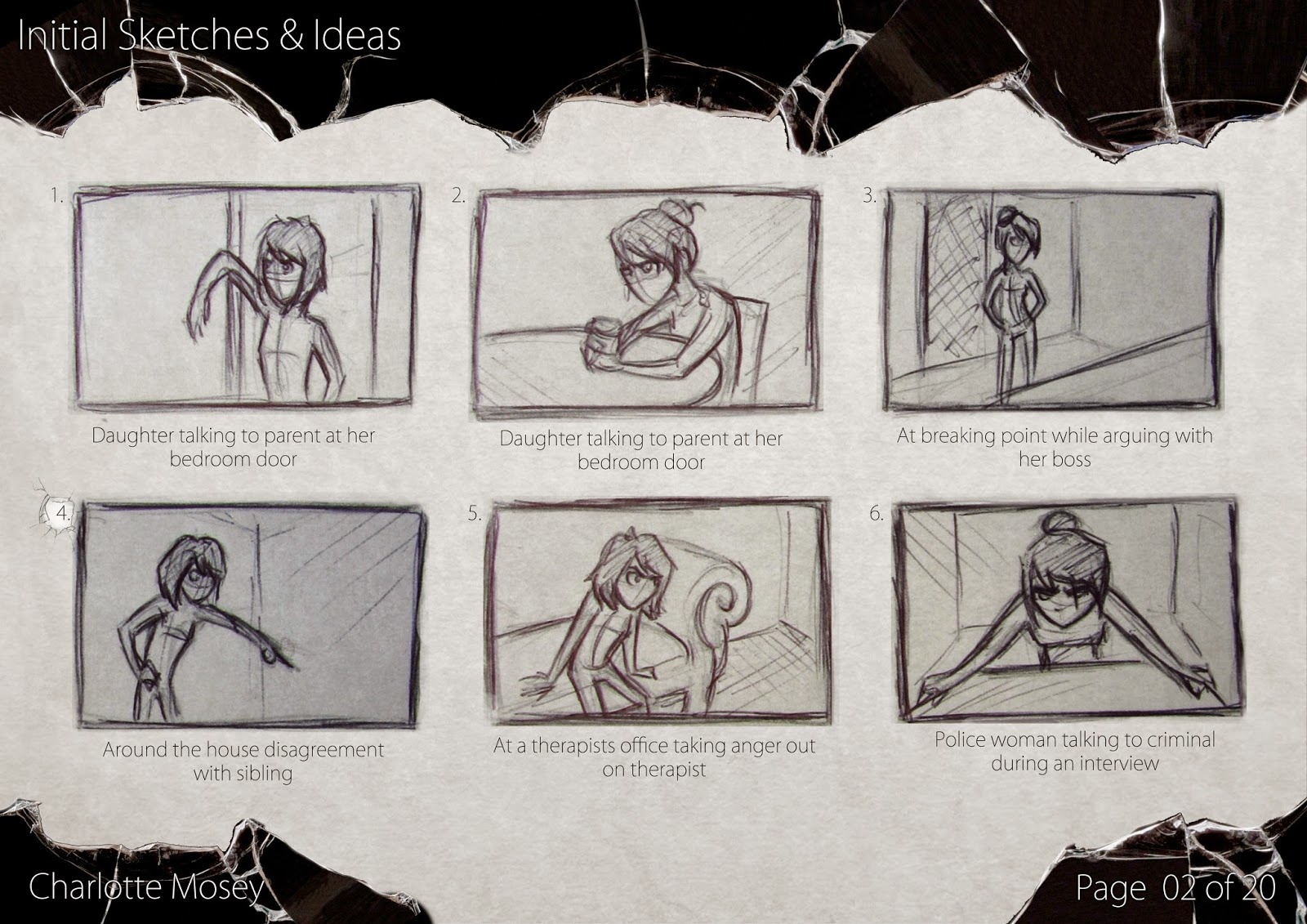 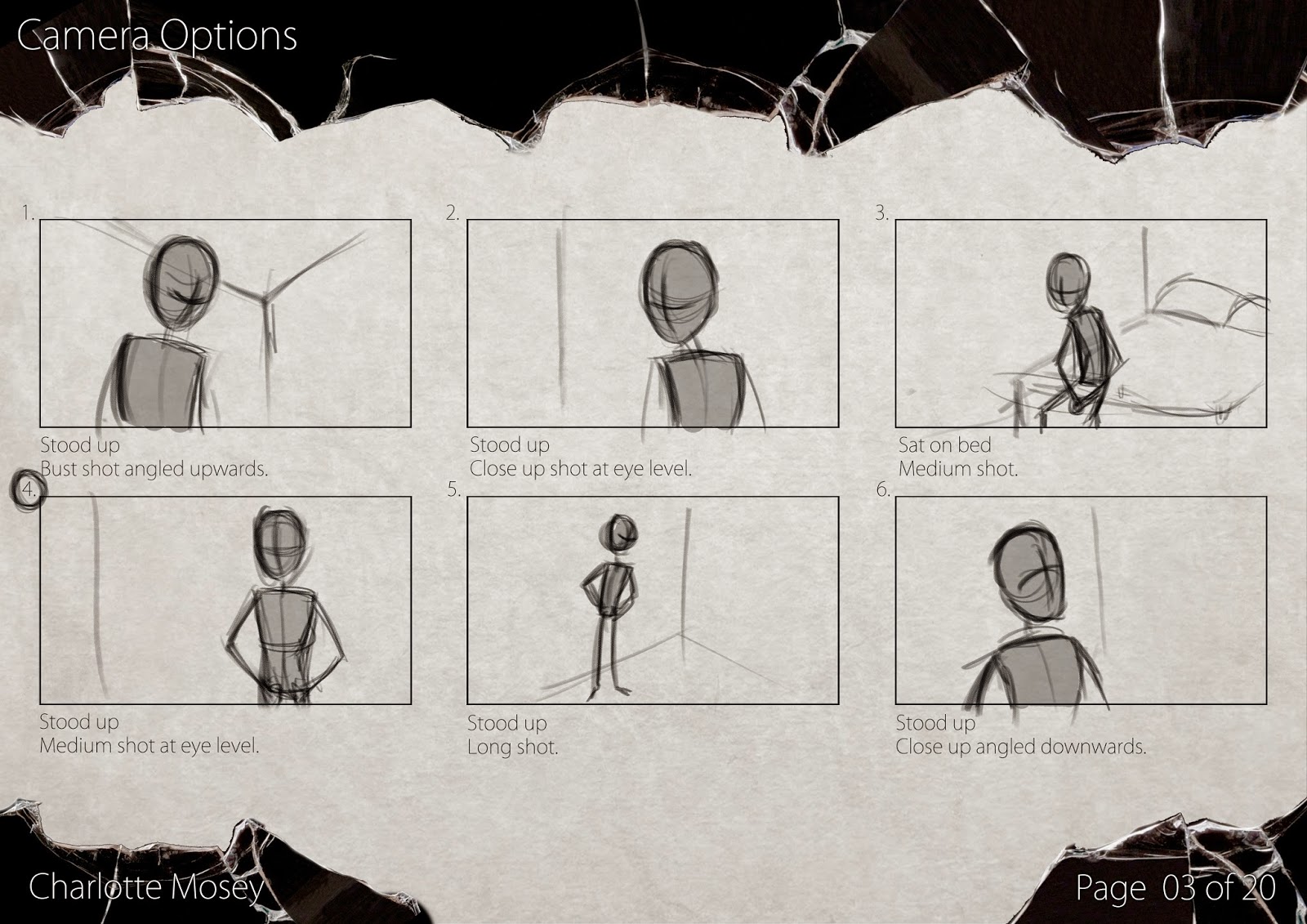 After roughly planning out what situation my character would be in and the context for the animation, I did some research for inspiration. I looked at characters who were similar to how I wanted mine to be. I also looked at facial expressions I thought would work well for the character with the dialogue. 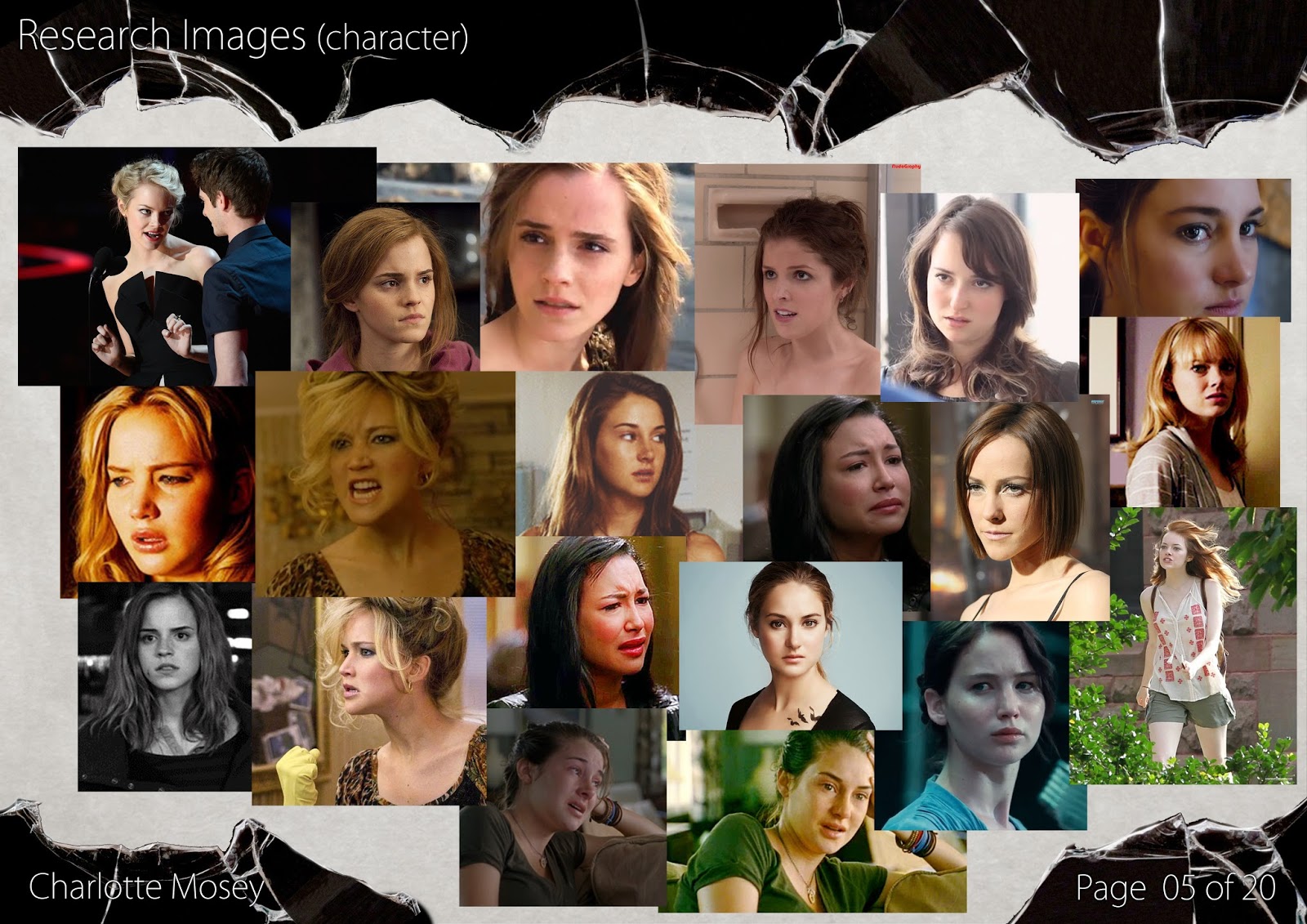 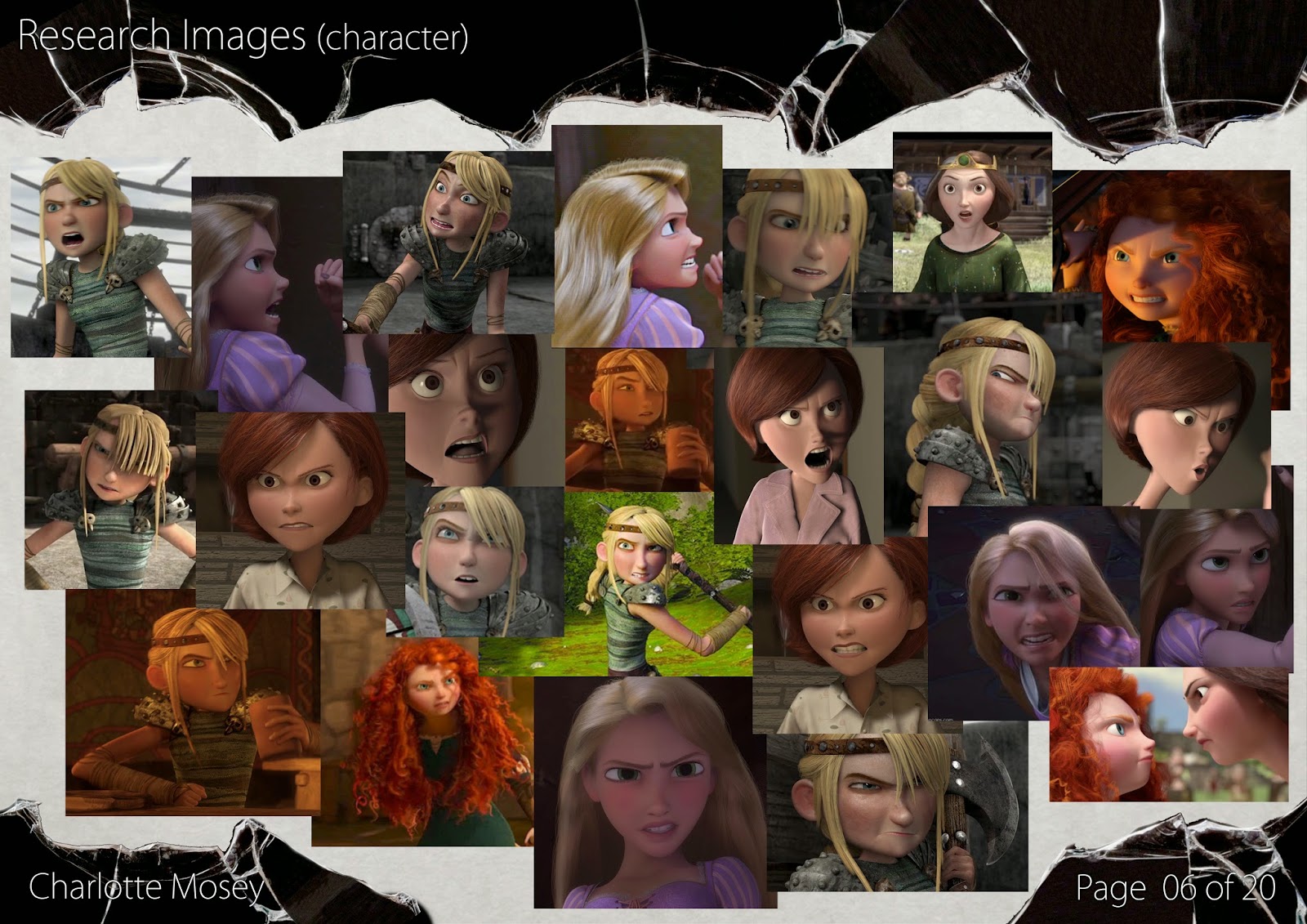 After research I threw out a few quick poses I thought may work, just to get a feel for what sort of movement I wanted. 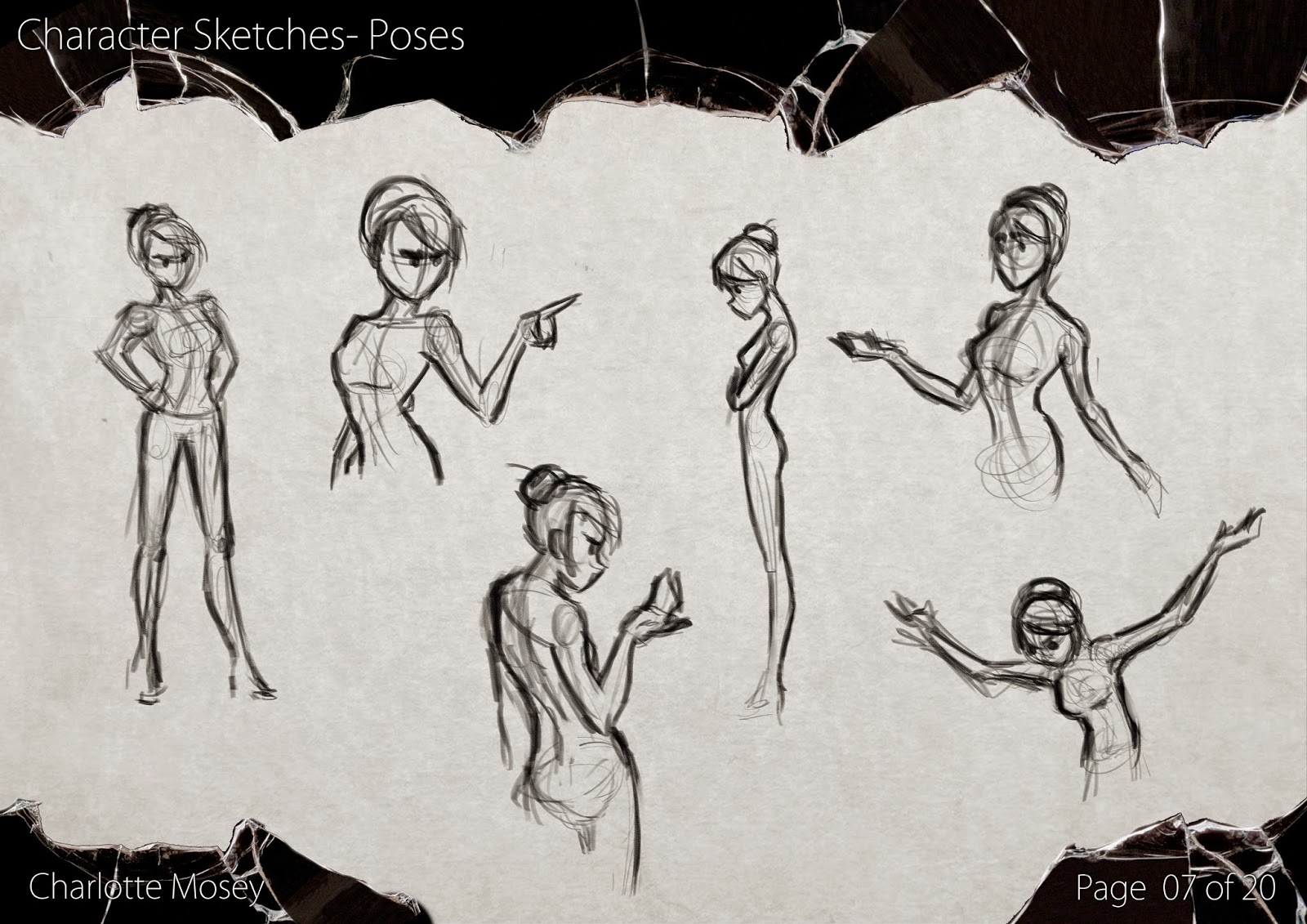 I also explored a few options for the core emotion she would be driven by throughout the piece and what sort of gestures she may make depending on that emotion. 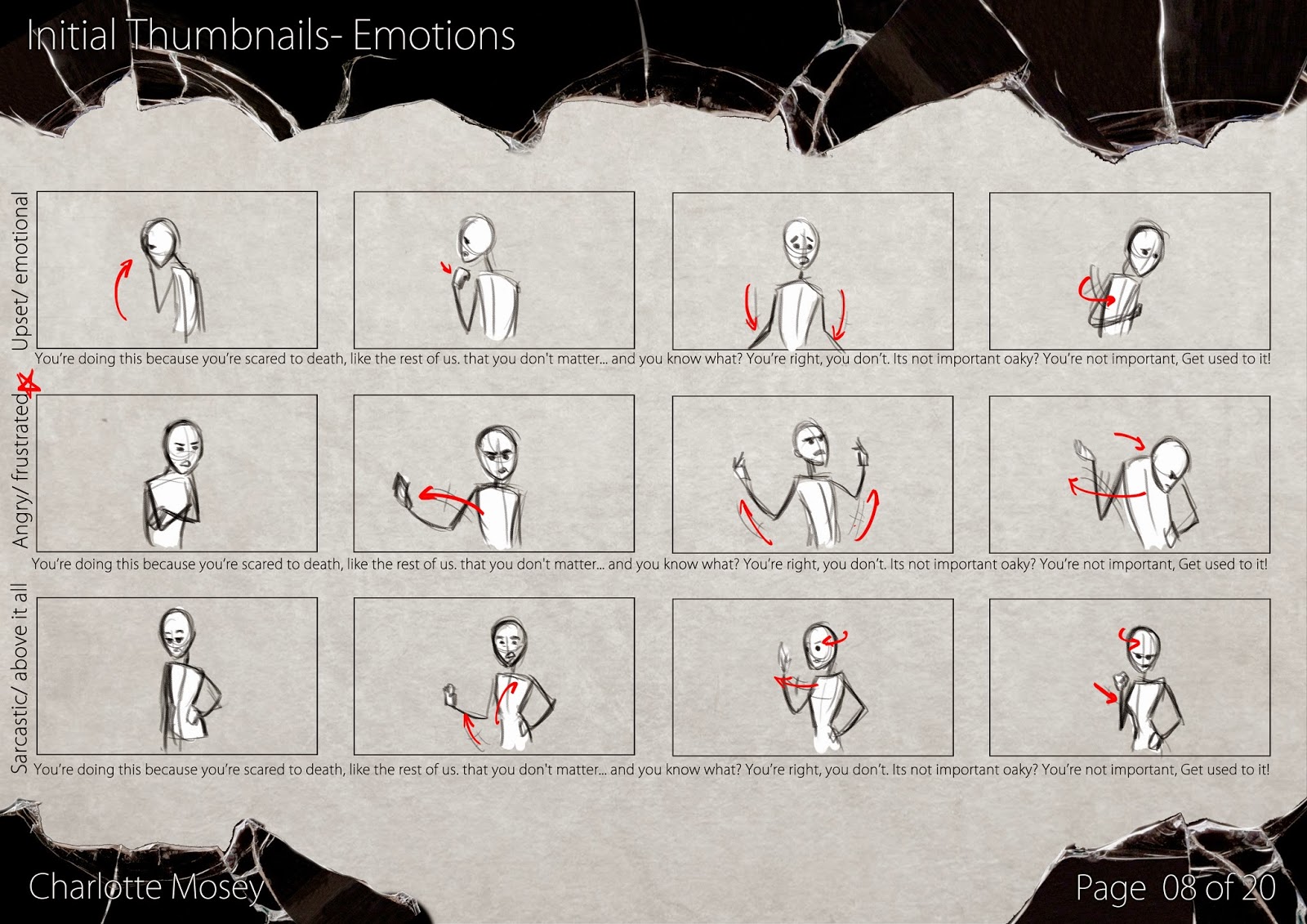 Although I wanted her to be mainly angry and frustrated throughout the dialogue, I didnt want that to be her only emotion. There is a lot of opportunity in the dialogue for many emotions, from a sad and contemplative pause while thinking to an outburst filled with rage. I explored some facial expressions she may hit and worked them into some poses too. 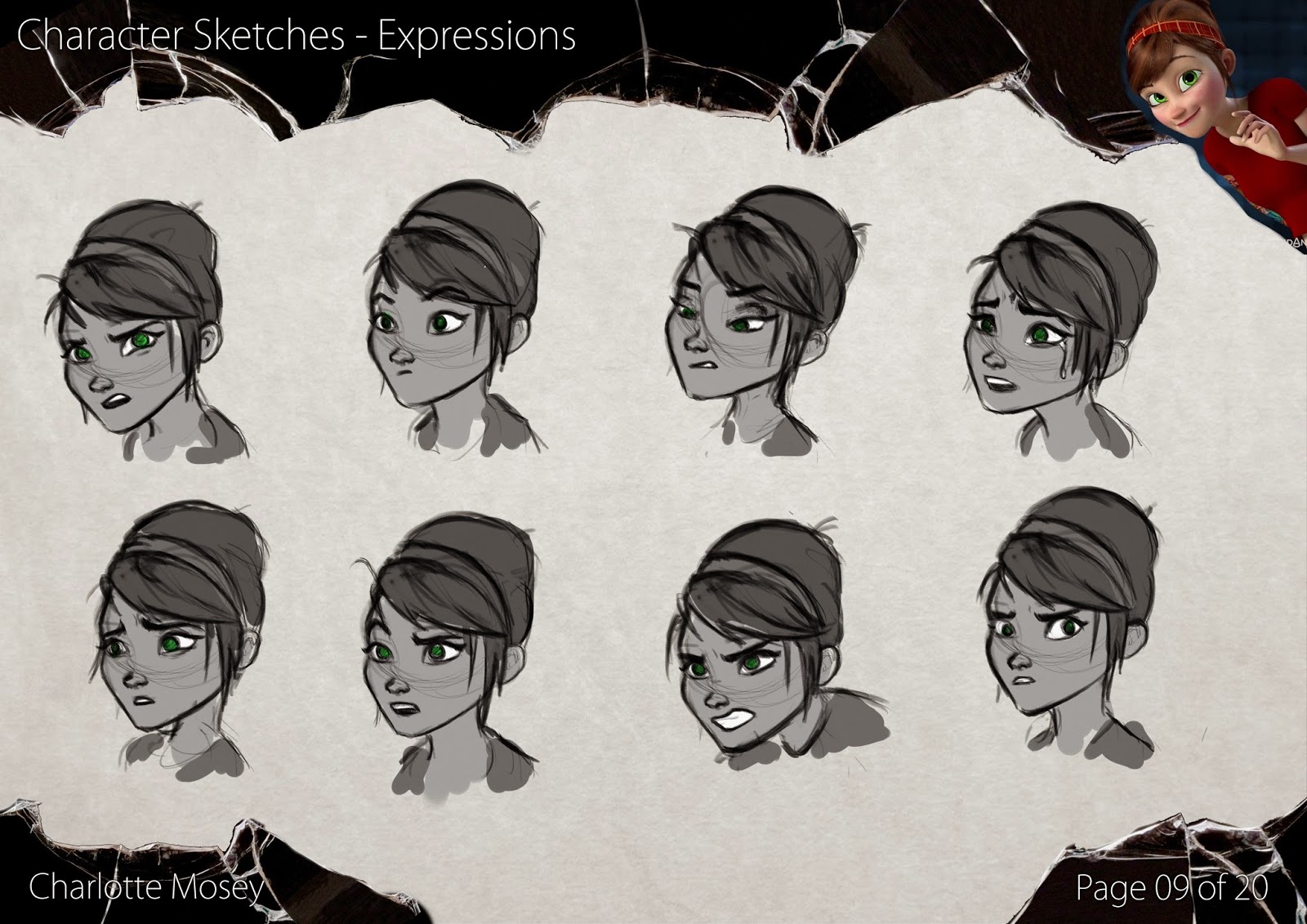 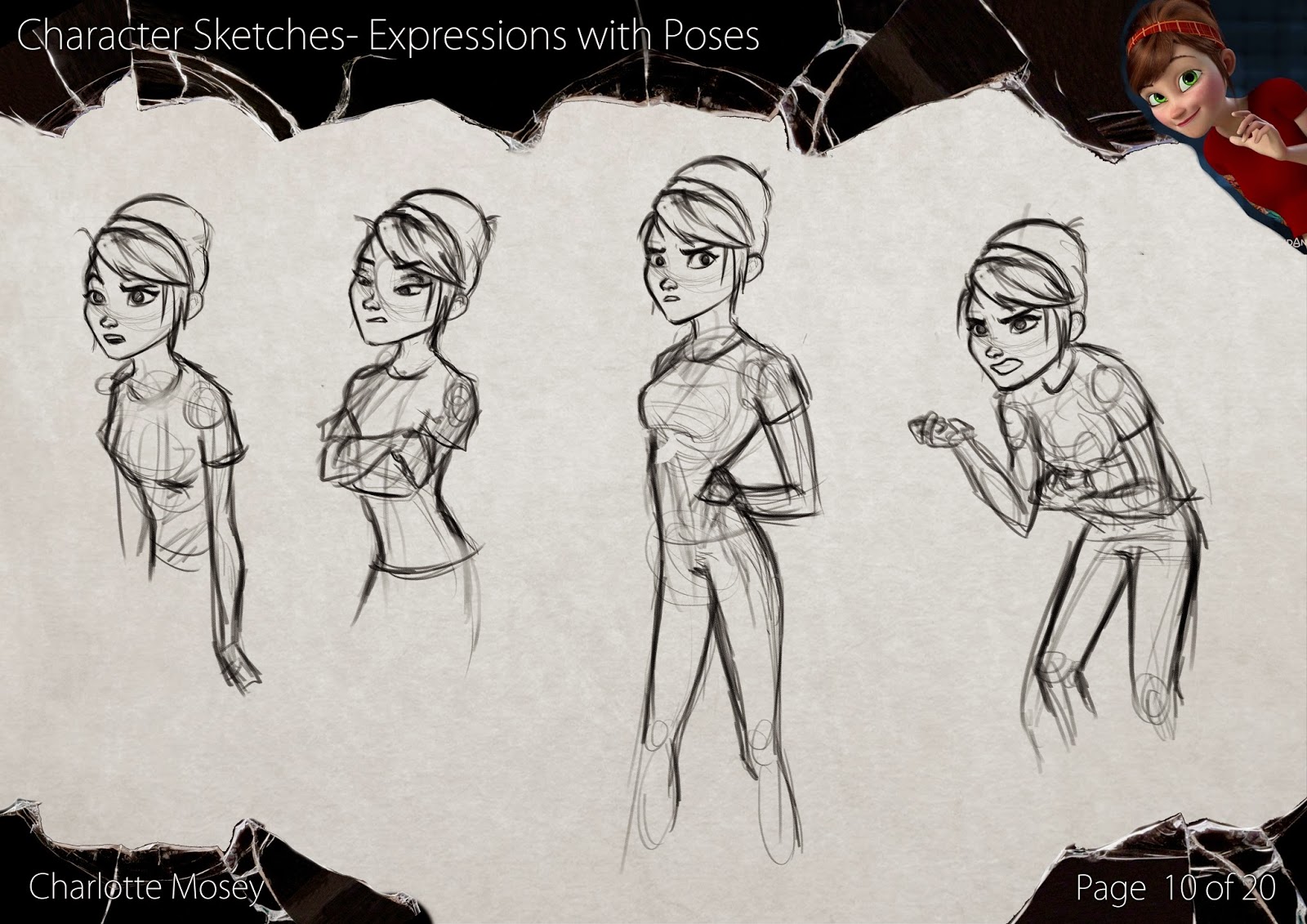 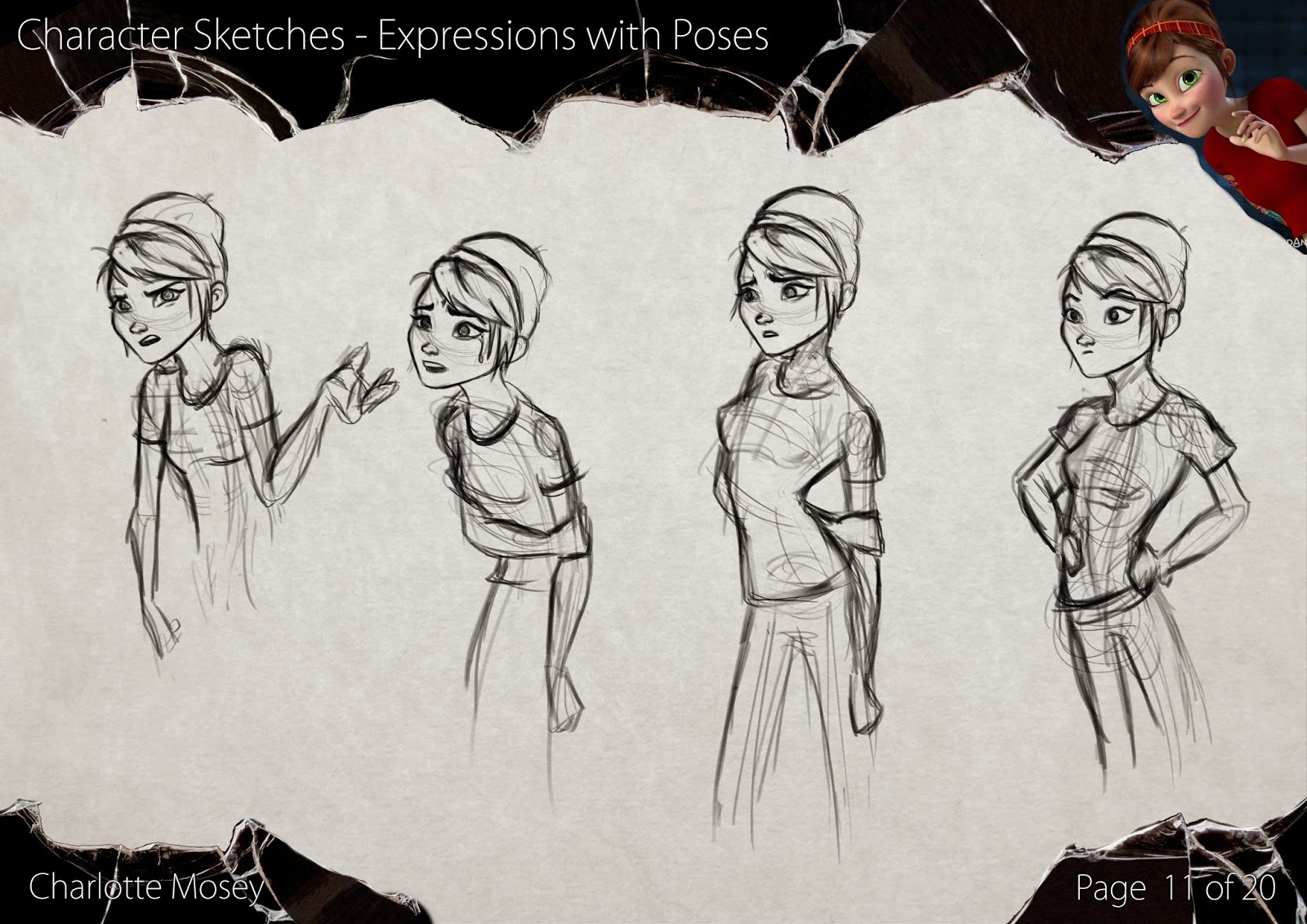 After I was happy with the character and had a fairly solid idea of the sort of emotions and gestures I would like her to hit, it was time for thumbnailing. 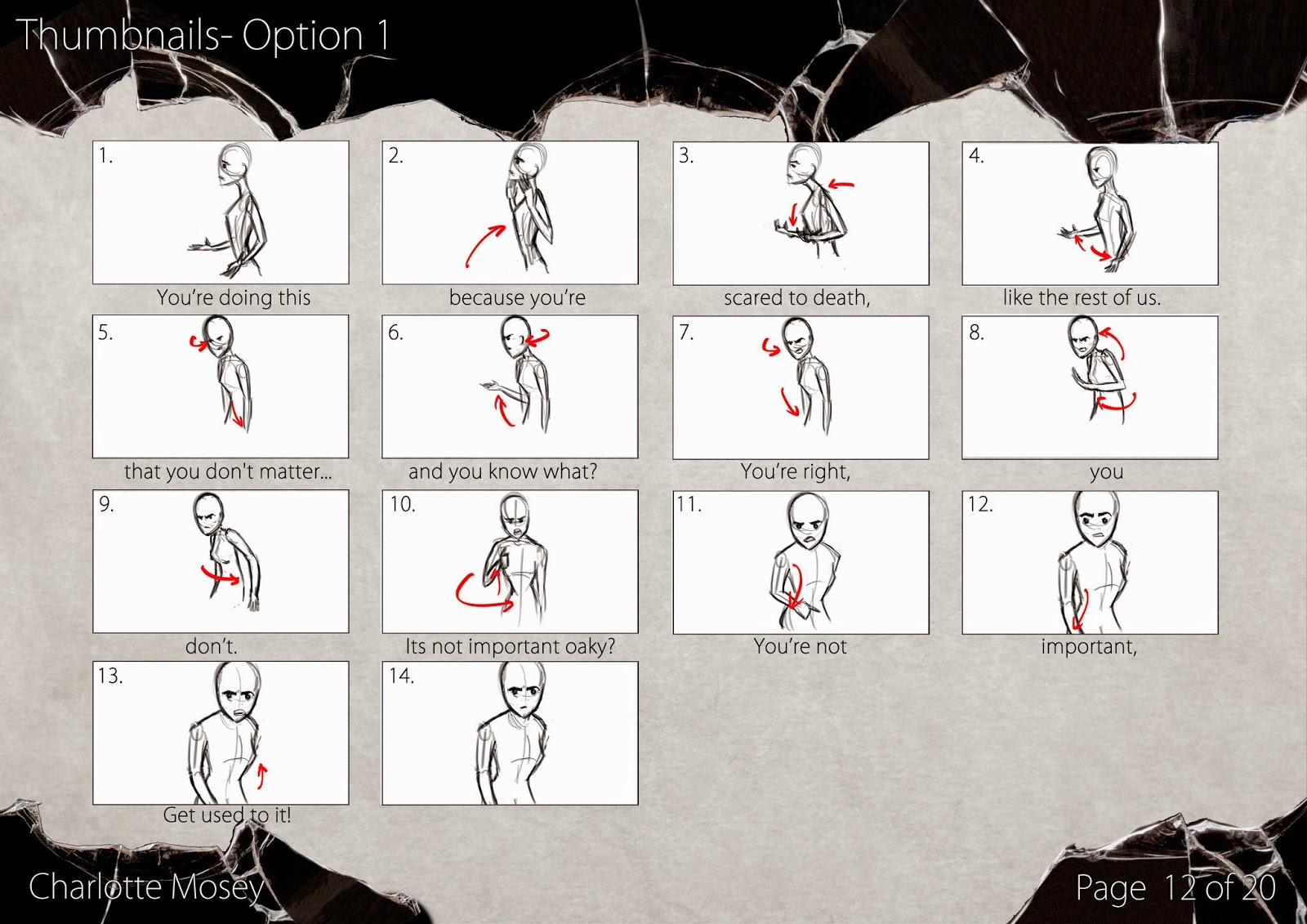 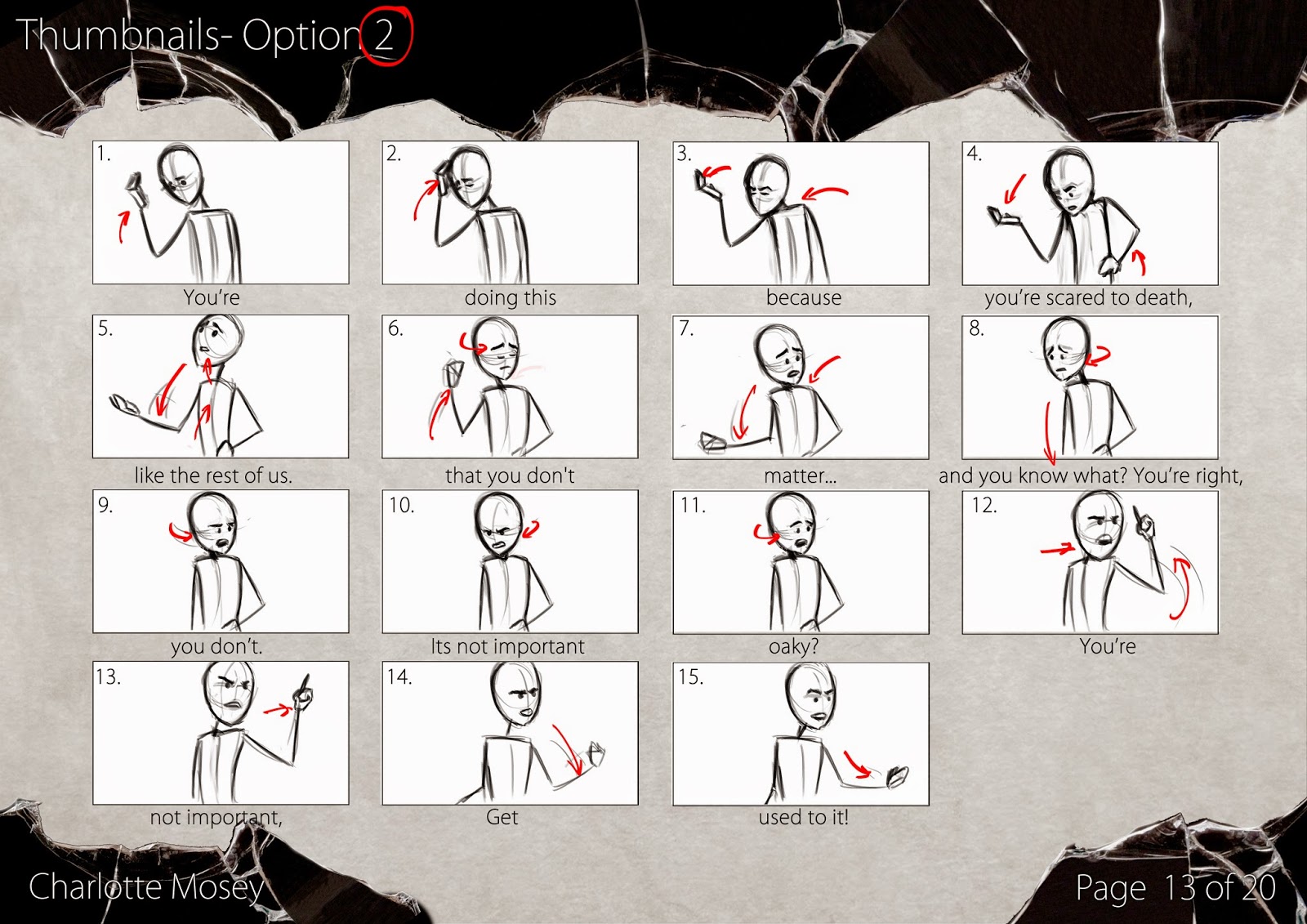 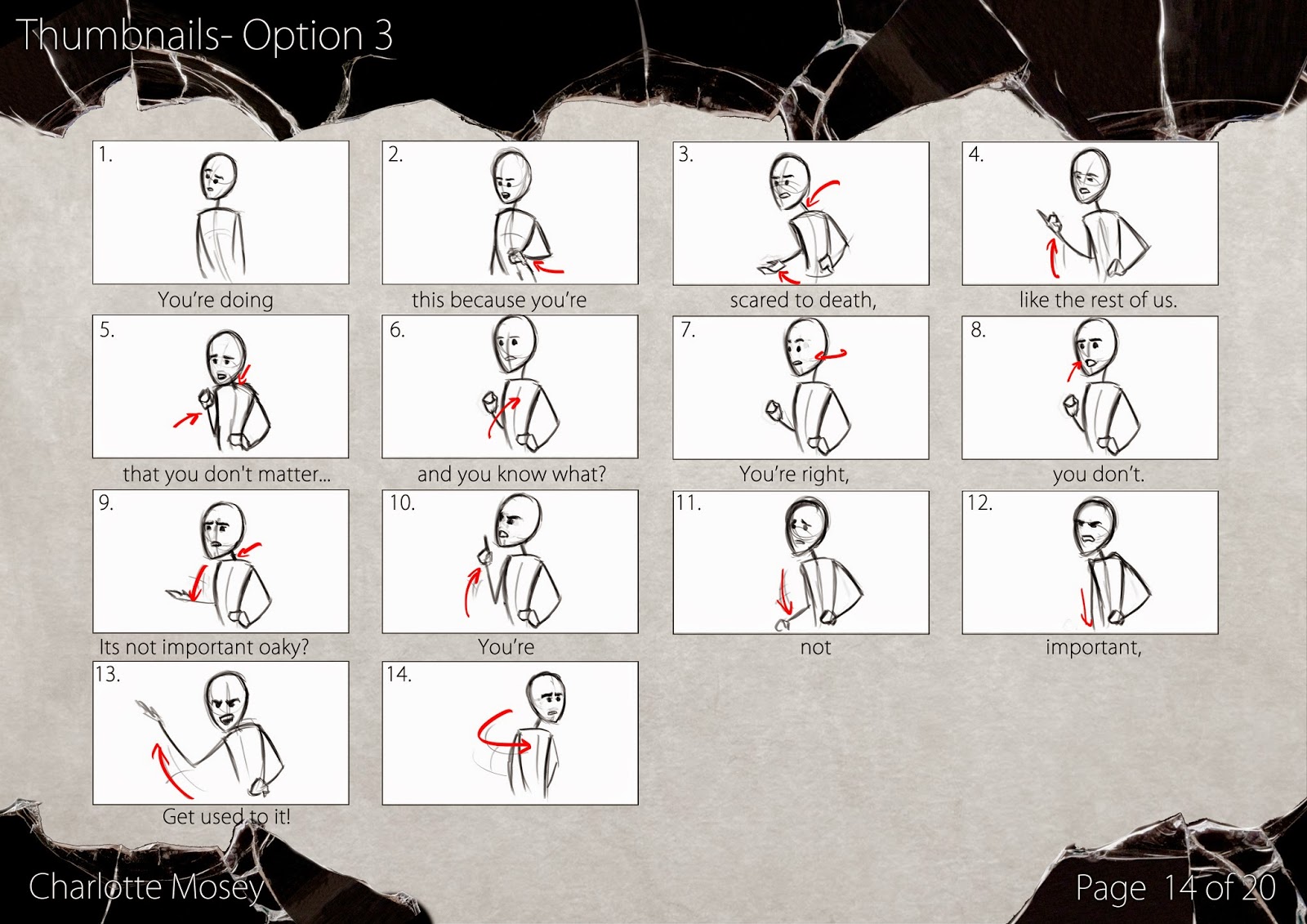 I chose to work on the second animatic as I liked the change from her started much more calm and slightly upset to then bursting with anger and acting in quite an intimidating way. 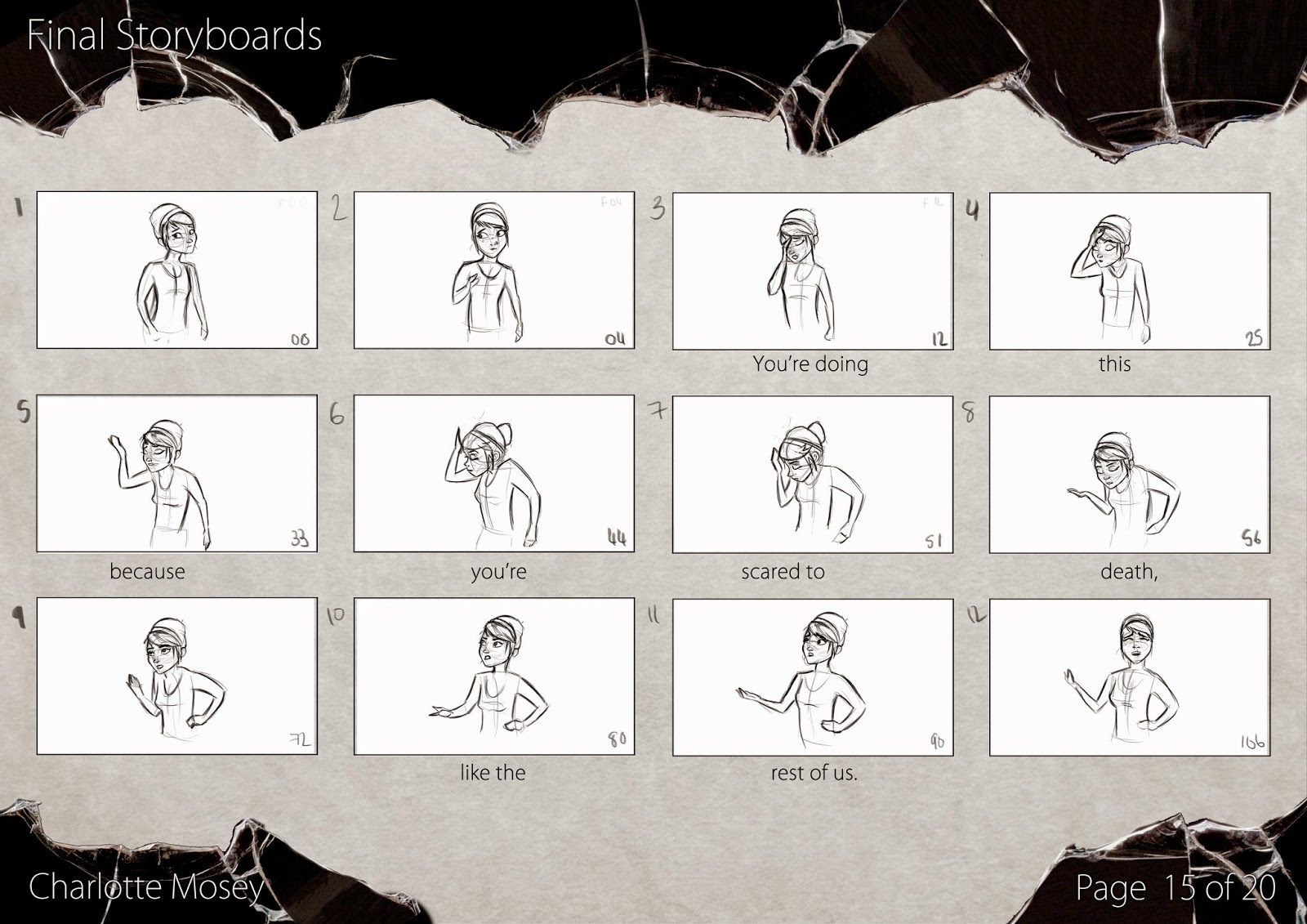 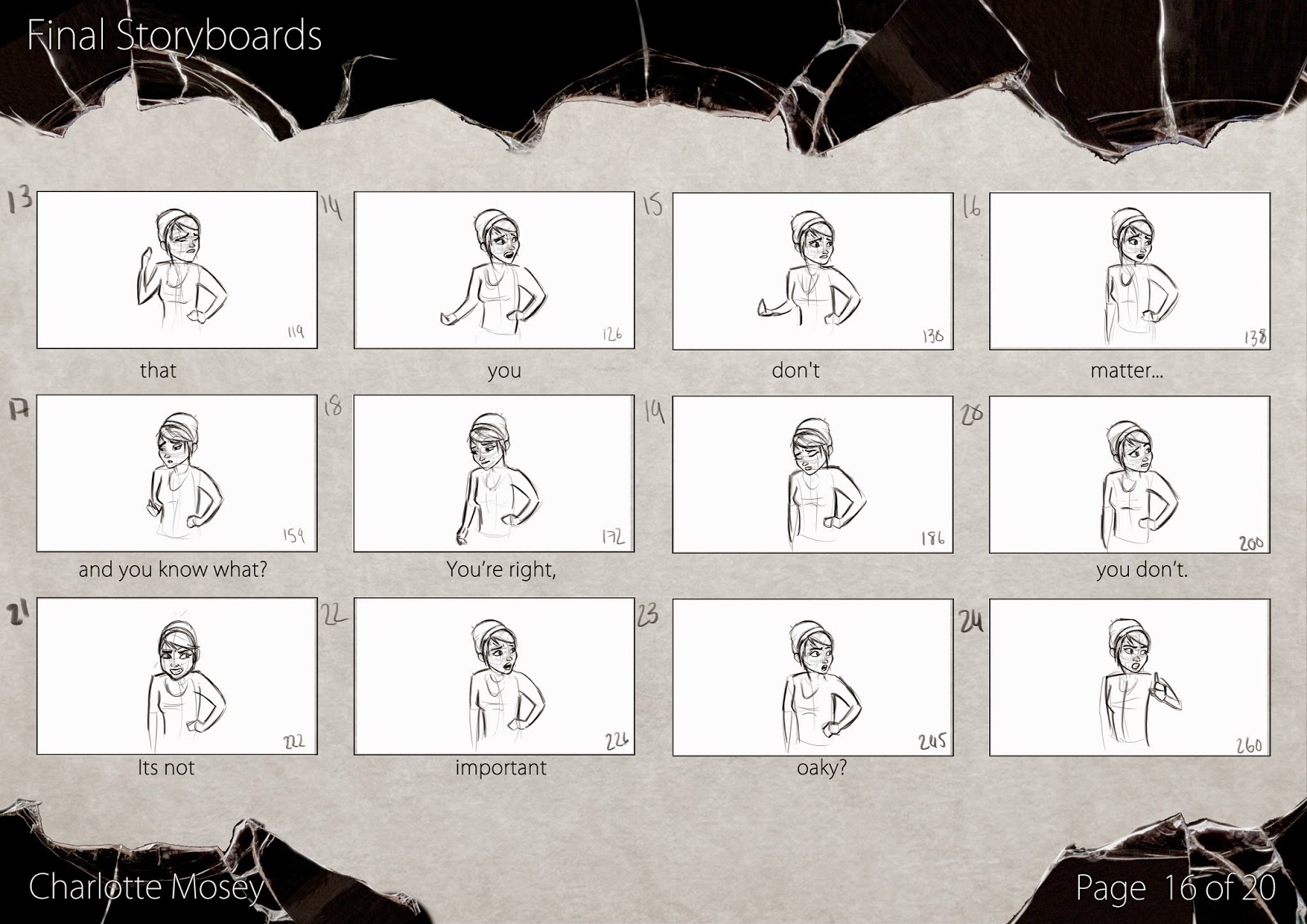 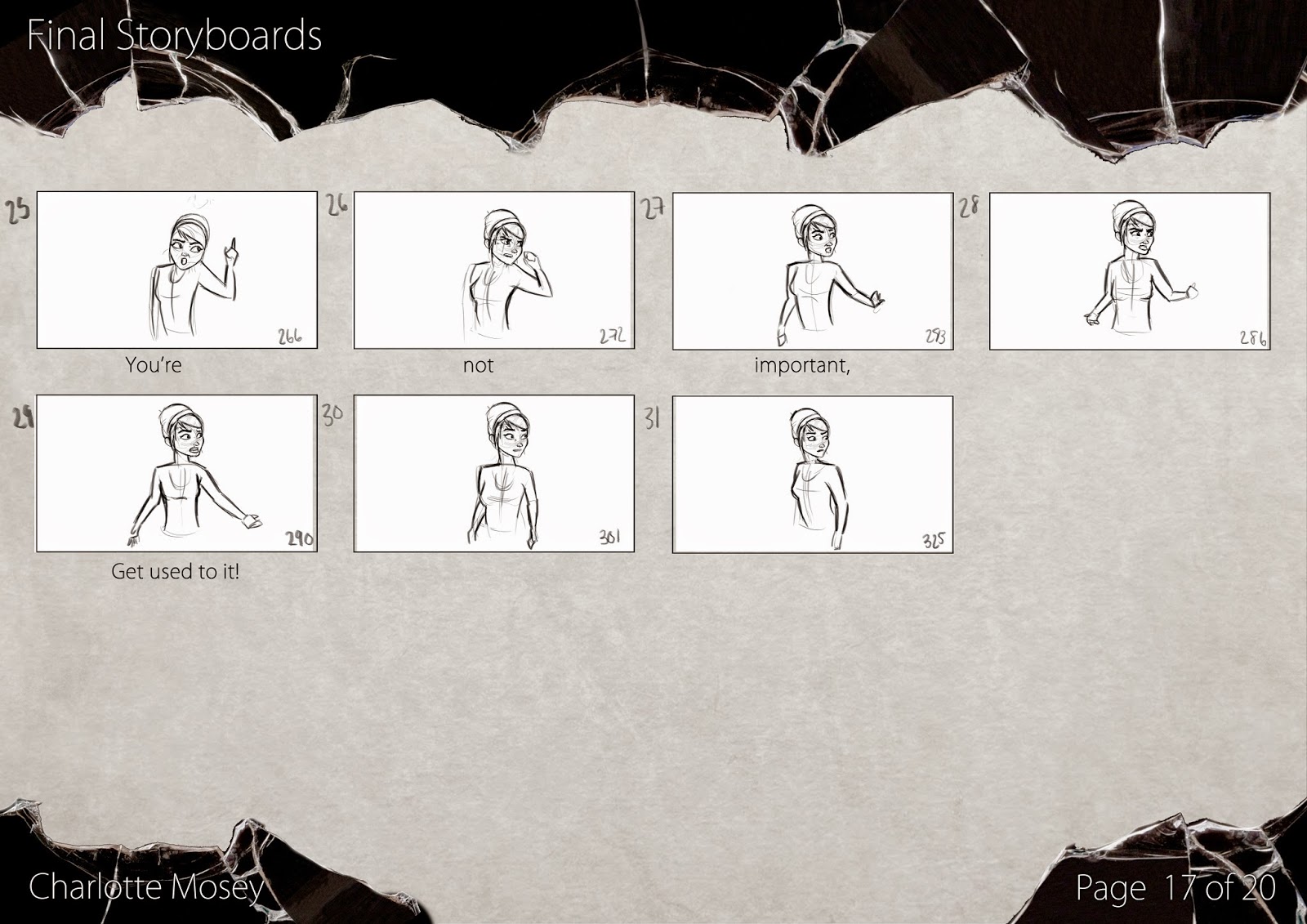 I am really excited to start working on this dialogue piece. There is a lot of opportunity to push poses and facial expressions. Also, as I want to eventually get into character animation, this is exactly the type of thing I enjoy the most and want to improve my skills at. I can see myself spending the most time on this project when production time comes.
Posted by Unknown No comments:

The time has come to plan my final major project. My Final Major Project is a project or group of projects that I will work on over the last 16 weeks of my final year. They must add up to 80 seconds. We can choose what it is we work on and how many projects we choose to take on as long as at least 50% of the work is collaborative.

For me, this is the project that will give me the material for my final show reel before I graduate, so I bared that in mind when deciding what projects to work on.

-
My classmates had a chance to pitch any projects they had already planned and wanted to direct. This was an opportunity for the rest of us to make a decision on who we would like to work with and what projects would best suit us. I decided to choose my collaborative projects first and then fill in any gaps with personal projects so I have a well rounded show reel at the end of the year.

'Dance Off' is a project I will be working as an animator on. It is planned to be a short film set at a high school prom. The main character attempts to make his way across the dance floor while being ambushed by various girls trying to win him over by dance.
I decided to work on this project as I think it will be a great opportunity to work on body mechanics and two character interaction. The short is planned to be very funny and cartoony, so it will also be an opportunity for me to try a more exaggerated animation style.

'Alpha' is a project that I will be co-directing and also working as head of animation. 'Alpha' planned to be a short film that works as an advertisement for a game. The main characters are a girl and her creature companion. The game would about the two of them exploring and hunting down these 'Alpha' creatures. The short follows them as they make their discovery of an Alpha for the first time.
I was drawn to this project because of the light hearted humor and the dynamic between the two characters. I think this is a good project as it gives me a chance to work on my non human character animation. This is also a much slower piece to 'Dance Off' so I will have a chance to work on more subtle animation.

The tree project is a artistic short I was asked to animate on. Its planned to be a very short piece of animation, where a tree-like creature walks to the top of a hill and releases spoors into the wind.
This will be fairly simple animation but I think is a good chance to work on a walk cycle for a large heavy creature. Also, this is planned to be a very technical artistic short, with wind dynamics moving grass and leaves and many particle effects with glowing spoors and fire flies. I think this will be something different to add to my show reel and make it pop.

-
As I want to get into character animation, I wanted to mainly work on characters for my personal project. I also intend to fill in any gaps in my collaborative projects with my personal. I want my show reel at the end of the year to fully represent who I want to be as an animator when I graduate. I also want to work on things that I know I will enjoy and things I havent had the opportunity try out. I want my personal projects to be fun but push me as an animator.

With the collaborative projects planned, I had a lot of mimed acting but no dialogue, so I decided to work on two different dialogue pieces. The plan is to have one male and one female as I would like the chance to use both the Mery and Malcolm rigs.
For one of my dialogue pieces I would like to work on something very emotional with quite I high intensity. I feel most of my collaborative work is fun and light hearted so I want to make sure I have something serious in my show reel too. It may end out sticking out a little in my show reel but its something I am desperate to have a go at.
To balance out the first dialogue, I would like something that is quite funny. Possibly a piece where I can play around with a lot of gestures and comedic timing. Of course, when it comes to finding a sound clip, it could all change.

Finally, I wanted to work on some more body mechanics. Although its not the main thing I would like to do, I feel its been very useful for me in the past and helps with timing and weight. Last year I really enjoyed working on my gymnastics project, so I think I will try something similar again this year, but perhaps more difficult. I would like to try to animate some free-running and parkour as I thunk it would be very challenging but fun. I would also really like to use the Stewart rig again, and I think it would be well suited for something like this.

-
Now everything is all planned, its onto pre-production!
Posted by Unknown No comments:

Here we have my animation progression for the ident/ sting project.

First off, the first block:

I found posing the K character very hard for this piece. He has very unusual body proportions and his large head I found to be quite a challenge. I used my reference video mainly for timing with K as the model could not hit the poses I could.

Smoothing this out was a lot of fun. I tried hard to get nice curved lines on K's movement. N was pretty idle throughout this piece so it was a good chance for me to practice that. I haven't really done idle animation before as there hasnt been much call for it in dialogue or mime pieces I have done in the past. It is something I would like to make sure I can do however as it is very important (especially for games)

As acting TD I was responsible for the rendering of this piece. Im quite happy with how it turned out overall. It is not exactly as we originally planned but I am pleased with what we did in the time we had. If I were to go back I think I would have liked to make the animation with K a little more toony and really exaggerate the movements and the fall.

Finally, we had to make a 'making of video' brace yourselves as there is my video reference in there which is not the prettiest. I think its a nice idea to have a making of video though, I think I will try to do this with some of my future projects. Its a nice way to round up a project.

Now Im back in to the swing of animating, I cant wait to start up my final major projects. We will have a lot of time on these and a lot of freedom so Im excited to see what projects our class creates.